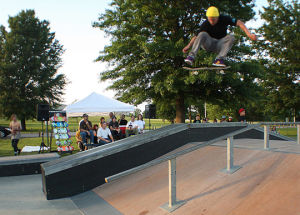 For a 6-year-old boy, getting a skateboard for Christmas is a pretty common gift, but for Jordan Hoffart it was more than a gift.

“I didn’t really know what it all meant at the time,” said Hoffart.

Hoffart grew up in Vancover, Canada and would travel to the U.S. to skate and edit videos with his friends. At age 16, he got his first real sponsorship in the United States, by Sixteen Skateboards, after skating in Tampa Am, a competition for up and coming amateurs. A year later he picked up sponsorship from Bones and started skating as an amateur for Powell.

“Skateboarding was never really a real career option and for most of my friends, once the money ran out they stopped and got real jobs.”

After graduating high school at 18, Hoffart had small roles in movies made at the Actors Union in Vancouver, which they called Hollywood North. A few of his roles paid enough for him to buy a house and he started working to pay the mortgage. Shortly after Powell approached Hoffart with an ultimatum of “are you going to do this?” After thinking over the idea and talking with his parents, Hoffart decided to take the chance. He rented out his house and started making more trips to the U.S. to skateboard.

“I wasn’t making a whole lot of money but I was making enough to live off of for awhile and I was having a lot of fun and I realized that this is what I want,” said Hoffart.

Skateboarding started slowly becoming a career for Hoffart and he became professional eight months ago, at age 24. After “FUN,” the newest Powell video dropped, more and more companies started to approach Hoffart.

Hoffart is currently filming for video parts with Bones and Adio and working with Adio on a pro shoe model. After 18 years of skateboarding, broken ribs and breaking his ankle twice in the same year, Hoffart continues to rise to be one of the best in the industry.

“It really is awesome. That is the dream and there’s a lot of people that do not get to live the dream,” said Hoffart.