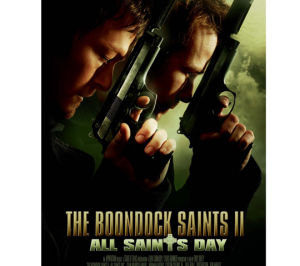 The release hit only 67 theaters nationwide. However, after a March 9, 2010 release on single disc DVD and Blu-Ray, allowing those who couldn’t see the film in theaters or on bootleg Web sites to get their first glimpse.

The sequel takes place eight years after fraternal twins Conner and Murphy MacManus (played by Sean Patrick Flanery and Norman Reedus) and their father massacred mob boss Yakaveta. The trio are living in exile on a sheep farm in Ireland when they get word that someone has framed them for the murder of a Catholic priest back in Boston. The twins, who set out in the first movie to only kill those who they believe are evil, decide to settle the score with those involved and head back to the States.

While on a boat back to the U.S., they meet up with a Mexican fighter named Romeo (played by Clifton Collins Jr.), who finds out who the infamous twins really are and wants to help them in their efforts.

Julie Benz takes over the vacancy left by Willem Dafoe as Special Agent Eunice Bloom, an FBI investigator whose main job is to make Boston’s finest—Detectives Greenly, Duffy and Dolly—look like idiots. The three cops make a return from the first movie, and this time are trying to keep the twins out of custody so they can continue to clean up the streets.

While the film does provide a gratuitous amount of violence, plenty of funny quotes and a lot of backstory to the first film, it is somewhat lacking compared to the first movie. “Saints” fanboys will either love the movie for the simple fact it’s more of the same thing or completely hate it—there is no middle ground. The second movie feels more like a parody of the first at times, although it does a great job of amping the audience up for a threequel.

Overall, there are days that I like this movie and days that I don’t. Considering I saw the sequel before I saw the first film, I actually fell in love with the series because of the first movie. However, on further review, the second film lacks a lot of intensity that the first one had. If you’re in the mood for something a little funnier, “All Saints Day,” is a great movie to watch. But if you’re looking for the rawness that the first movie had, you’d be better off watching “The Departed” on HBO.