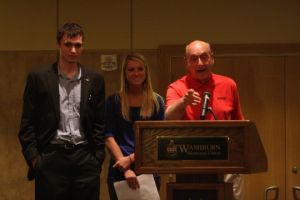 Dick Vitale’s presentation “How to Win at the Game of Life” could be summarized in one thought. Follow your dreams.

Providing a moving and motivational speech to nearly 1,000 people in Lee Arena Wednesday night, Vitale, 70, gave stories of his life, sharing experiences that have shaped who he is today and providing goals to pursue and strong ways to live.

Preceding his speech was a Coaches vs. Cancer banquet, which allowed individuals who bought $100 tickets, to meet the likes of coaches Bill Self, Frank Martin, Bonnie Henrickson, Deb Patterson, Bob Chipman, Ron McHenry and other notable figures around the area. It also included Vitale and the proceeds went directly to the cancer research through the foundation.

Prior to the event, Self talked about how the area coaches come together every year for an event like this, but never one of this magnitude.

“This is something that we’ve certainly done before but we haven’t had Vitale as part of it. So having Dick here is a big deal for the charity and for Washburn University,” said Self.

Martin also saw the event as a huge positive, saying when Coaches vs. Cancer is mentioned, all differences are put aside.

“When you reach out to people of college basketball and you put the tag ‘Coaches vs. Cancer,’ you will get our attention,” said Martin. “As soon as any of us see that, we’re gonna’ run and come support it. It’s just something that’s very dear to us.”

Self and Martin both agreed that when an event like this occurs, it takes all the coaches out of their professional roles and back into their roles as people. Martin also touched on how the coaches look at one another.

“The one thing I can tell you is that Bill Self and I have tremendous respect for one another and I have tremendous respect for the job he does and for Coach Chipman and the job he does,” said Martin. “It’s a wonderful thing where we’re as competitive as we are in our world, but we can connect and join hands and use that competitiveness together to go fight this disease.”

But after this event, it was time for Vitale to take center stage. After an introduction from Martin, Vitale jumped right into his presentation, which he presents virtually on the spot and is never quite the same twice, even if the moral is almost never-changing.

Big subjects for Vitale included sticking through and close with your family, his coaching jobs and broadcasting opportunities, as well as facing adversity and not giving into pressures to live how others tell you to. Vitale also explained in a 30-minute press conference prior to the speech what had been ingrained in him at a young age to keep his positive attitude.

“I will talk about never ever believing in ‘can’t’ (during the speech) because that’s been indoctrinated in me as a kid growing up. I grew up in a family where my mother and father were uneducated but they had a doctorate in love. They taught me this great country,” said Vitale. “If you have a drive and desire, a passion in what you’re doing, a lot of good things are going to happen.”

During the speech, it became very clear Vitale wasn’t just speaking to motivate, he was also speaking to repay and give back to others because of what he’s been given in life.

“There’s nothing more important to me than helping others. In my life, so many others have helped me,” said Vitale.

It was crystal clear as he concluded his speech to a standing ovation that the message had hit home and maybe allowed for some of the audience to look into pursuing their true dreams. During the press conference it was clear that Vitale’s not giving up his own dreams anytime soon, especially with what has been given to him through broadcasting.