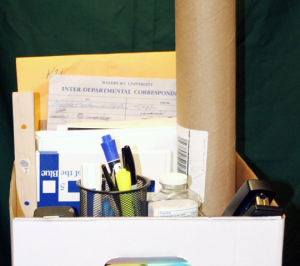 Tuesday morning Washburn woke to a new reality as two respected members of the Washburn community stepped down from their positions.

“Dr. Bowen always was willing to listen to us on different issues to help us work towards things like success week and making the Washburn Transformational Experience an optional program,” said Love. “I feel like Washburn will still be able to stay focused though on issues like the strategic plan that Dr. Bowen helped to head up.”

The announcement, while surprising, wasn’t completely shocking to some.

“This was an enormous surprise, but not a complete surprise as there had been a rumor floating around about the future status of the two people who stepped down for about a week before a formal announcement was made,” said Tom Prasch, faculty senate president.

Despite the rumor mill, the administration had already informed the proper people of the decisions.

“I was told in a meeting with President Farley on [Monday] about the decisions,” said Prasch “I believe, though, the various deans were told sometime last week.”

The Washburn community is trying to make sense of what has transpired.

“It was a complete surprise to me,” said Kathy Menzie, chair of the faculty senate academic affairs committee. “Nobody really has any idea what’s going on right now.”

Bowen, who started as vice president of academic affairs at Washburn in 2007, was working through the process of completing the strategic plan for Washburn, as well as restructuring the general education curriculum when the news broke.

“This was really surprising, in her case, since she seemed like she was just starting to get comfortable in her job,” said Prasch. “Since she came in, having to replace a very popular and well-respected person on campus in Ron Wasserstein (vice president of academic affairs 2000-2007).”

Hill stepping down also leaves faculty and students pondering what prompted the move at such a critical time for Washburn. With a budget crunch and a tough local economy, the resignation of the vice president of administration and treasurer position raised eyebrows.

It’s hard to see how transitioning to someone new can be beneficial to the university while it is in such a budget crunch, said Prasch.

President Farley was in meetings and unavailable for comment.

“This is a personnel issue and we don’t comment on those as a policy,” said Dena Anson, director of university relations.

Anson did, however, go on to comment on the nature of the situation, terming it as “normal for this time of year.”

Other members of the Washburn community though feel that the situation is anything but normal.

“From my personal perspective, this is not a normal situation, having two vice presidents step down at the same time,” said Prasch

Anson also dismissed any connection of Hill’s resignation with the dismissal of Michael Gunter, formerly head of Internet System and Services who worked under Hill until last semester after the SunGard software installation debacle.

Moore will be returning to Washburn University in the same role he worked at from 1997-1999 before leaving in 2000 to pursue a position with the Kansas Health Institute.

As the deck continues to be shuffled at Washburn, some people can’t help but wonder when all the staff changes that the school has seen will end.

The multitude of staff changes during the last 10 months has kept Washburn changing nameplates around.

“It seems like there has been more movement than has been the norm in the past at Washburn,” said Prasch.