Taking the past to task 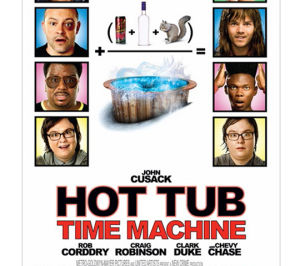 “Hot Tub Time Machine” is the second movie released this March from screenwriters Sean Anders and John Morris, quite impressive considering that before this month the pair had only three writing credits to their names. Together with the even less experienced Josh Heald, the trio managed to pen the best comedy released this year (Although, in all fairness, it is only March and the competition for that title has been pretty weak thus far).

“Hot Tub Time Machine” follows three old friends and one nephew, in their accidental journey back to 1986. Adam, who, in one of the most fitting casting choices ever made, is played by John Cusack, has just been left by his latest girlfriend when he gets a call that his deadbeat friend Lou (Rob Corddry) has just tried to kill himself. Adam, along with his friend Nick (Craig Robinson) and his nephew Jacob (Clark Duke) decide to take Lou to their favorite ski lodge to cheer him up. After a night of reluctant partying in the now-rundown resort, the foursome find themselves back at Winterfest ‘86.

Although certainly not scarce, the references to iconic ‘80s movies or fads are not nearly as frequent as one would expect given the fact that the movie stars Cusack. For better or worse, the film manages to stick to what was happening to the characters instead of seeing how many different ‘80s pop-culture references it can fit into 100 minutes.

Despite their inexperience, the writers of “Hot Tub Time Machine” actually do a pretty good job finding the right balance between the aforementioned references, running gags, jokes, insults and digs on how lazy technology has made us. Nothing too forced or “groan-worthy” to make the movie seem too cheap, which is saying something when you consider the name of the film. If you need a good laugh to help break you out of the winter funk, “Hot Tub Time Machine” is probably worth a watch.