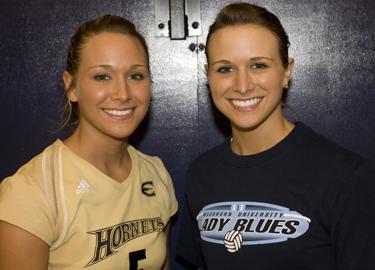 Washburn volleyball took a tough hit this spring. Redshirt senior-to-be Ashley Shepard, an outside hitter, is once again rehabbing an ACL tear—this time her left knee. The 5’10 Rossville product will undergo surgery May 12.

“We’re going to go in there to fix my ACL and figure out whether or not they’re going to be able to completely sew up my meniscus or just clip off the end,” said Shepard. “It depends on how severe the tear is.”

Shepard was sidelined in 2007 as a sophomore with her first ACL tear after playing in only six matches. She was awarded a medical redshirt and went on to a full recovery the next season, starting 24 matches out of the 36 she played in and earning honorable mention all-region honors by the American Volleyball Coaches Association. She was also a third team all-MIAA selection.

“Last time, I wasn’t completely, 100 percent comfortable diving and everything until about nine months,” said Shepard. “My coach and the trainers assume it’s going to be the same way, but I know I’m pushing myself harder now before my surgery because the more muscle you build, the more range of motion you have, the more swelling that’s down before surgery—it’s going to help out afterwards.”

During her junior campaign this season, Shepard started all 38 matches for the Lady Blues and accumulated 261 kills, the third highest on the team. She helped lead the Blues to a 33-5 record and looked to be one of the top returners this fall for her senior season.

“I know I’m going to push myself a lot more after surgery because I don’t have as much time,” said Shepard. “Last time, I had a lot of time. Like I had time to waste. I had four years ahead of me. This time, I have four months until season. I’m being realistic, my goal is going to be Senior Night.”

While filling Shepard’s void during recovery will be no easy task, Washburn does have the luxury of depth. The Lady Blues return five outside hitters from last season and signed two during the offseason, Kelsey Lewis, a 5’10 Washburn Rural product, and 5’11 Aubri Renshaw from Raymore, Mo. Lewis helped lead Washburn Rural to four state titles during her high school career and was also named the Topeka Capital-Journal City Player of the Year and Centennia League Player of the Year after her senior season. Renshaw was a member of the 2009 Missouri All-Star Team for the Missouri-Kansas All-Star Game. However, Shepard is hopeful she can make a full recovery prior to the start of the season.

“I know what to expect, I know how hard it is,” said Shepard. “It’s not fun by any means. I mean, I could deal with this—the whole tearing it and the surgery and rehab—anytime just because I know it sucks, but it’s like what are you going to do about it? It’s just the whole timing aspect now that’s the bad part.”