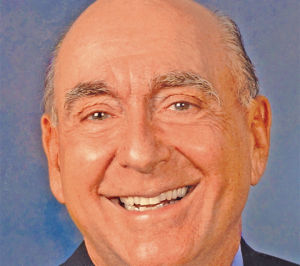 Hundreds of students, faculty and members of the community had the opportunity this year to participate in the Washburn Student Government Association’s lecture series. “Super Size Me” documentary film writer and star Morgan Spurlock and Fortune 500 company executive turned whistle blower Mark Whitacre drew large crowds when they guest lectured as part of the series during the fall semester. But there’s nothing like going out with a bang as Washburn University prepares for the arrival of the final lecture series speaker, sports analyst Dick Vitale, who will be speaking in Lee Arena tonight.

“The Washburn lecture series is something that began through WSGA that was for Washburn students, as well as faculty and staff. But the students were our primary focus,” said Caley Onek, newly elected president for WSGA.

Onek said the organization had high expectations and goals to bring in high-profile speakers as part of the lecture series. Former WSGA president Garrett Love agreed, saying the expectation of the program was to give unique opportunities to see big names here on campus.

But the biggest name in the lecture series is scheduled to wrap up this year’s program. A collaborative effort between WSGA and several other organizations and groups across campus and the community have made it possible to bring Vitale to campus.

“The coolest thing about Dick Vitale is that he is a fun personality. He’s enthusiastic, motivational and gets people excited about what he’s talking about,” Onek said, adding that even those unfamiliar with Vitale will find him a captivating speaker.

Bringing a high-profile speaker such as Vitale to campus is no easy feat. Big names mean big prices, and Onek said the opportunity to bring in Vitale would be impossible without additional sponsors and partnerships.

“We had to have sponsors to make this happen,”  Onek said. “But the neat thing is that something like this really brings everybody together, from student organizations to the Washburn Endowment Association and all our partners to the Topeka community. It will put Washburn on the map.”

While there may be some concern regarding the expense involved with bringing Vitale to campus, the fundraising and sponsorship involved has helped significantly, allowing WSGA to pay only spend a small percentage of the total.

WSGA is only paying between $5,000 and $7,000 from its lecture series fund and student activity fee money, which Love said was the smallest amount the organization has put toward any lecture. Love also said this was the first time a WSGA administration went out to fundraise and seriously raise the value of its dollar.

“We have raised more than what our salaries are as WSGA,” Love said.

Sponsors for this event include organizations like the Washburn Endowment Association, Campus Activities Board, Student Activities and Greek Life, Vice President of Academic Affairs, Washburn Women’s Venture Partners and the Leadership Institute to name a few.

Jessica Bremer, student director of the Program Committee in the Leadership Institute helped make the decision to become a partial sponsor of the event.

“I think it has been a great opportunity for the Leadership Institute to be able to help sponsor and get involved with bringing Dick Vitale to Washburn,” Bremer said. “Mr. Vitale has shown excellent leadership throughout his career and I’m excited to have this experience to hear him speak.”

A banquet will take place before the program, and all proceeds from ticket sales to both events will go directly to the Coaches vs. Cancer fund.

Tickets will be available at the door, but are available for pre-sale in the Student Activities and Greek Life office in the Memorial Union, or in the athletic department. Tickets are $1 for students, $5 for faculty and staff, and $10 for community members. Those interested in purchasing VIP seating and a seat at the banquet will pay $100.

Onek and the rest of WSGA are eager to see the event succeed and to be able to help raise money for a charitable cause.

“I think it’s really cool that we can do this, and give this to Washburn students and the community,” said Onek.