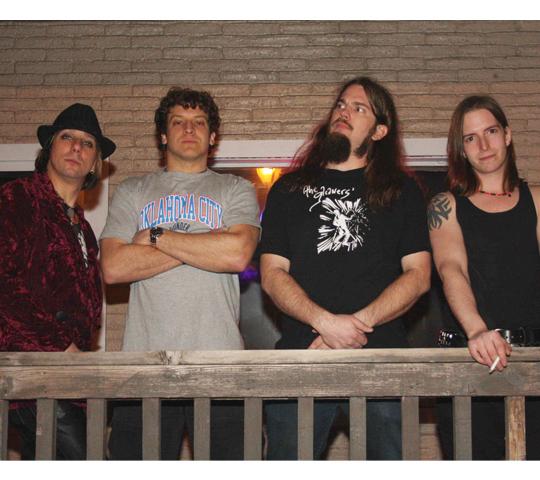 Jolly Roger put on a jolly good show at the Aftershock Bar, in Merriam, Kan. this past Saturday as spectators gathered to witness the band rock the stage in the midst of fog and primary colored spotlights.

Cory Gallagher set the rhythm playing the drums with exceptional skill as Lexis Merritt shredded the strings of his guitar producing a scorching solo that rang throughout the building. Matt Rodvelt sang out the lyrics to “Downriver,” one of the songs from their latest album, and Loach strummed the bass to complete the sounds for a rocking show.

The band started out in 2006 with Rodvelt and Merritt, adding David “Loach” Tackett to the crew, and later finding Gallagher at “Metal Night” at the Replay Lounge. Rodvelt and Merritt had been jamming together for 15 years and decided it was time to start something new.

“We wanted to do something raucous and fun for ourselves as much as the fans,” said Merritt.

The bands CD release for “Wasted” was held at the Boobie Trap Bar on Nov. 20, 2009, which is now available online and at some area record stores. “Wasted” is a nine-track album that was recorded, throughout a years work, at the Blacklodge Studios in Eudora, Kan. On this album you will find original artwork created by Joshua Finley Illustrations and tracks such as “Glamour Swill” and “Wrecking View.”

Jolly Roger has shared the stages with bands such as Bullet Boys, The Cast Pattern, Quietly Violent and Brass Knuckle Betty as well as performing at Truckhenge 2009 and Kilroys March Fest.

Future plans consist of playing and writing new music and promoting the local scene as much as possible. They will be playing a show called “Metal for Mutts” at Hawg Wild in Shawnee, Kan. on May 8 and all the proceeds will go to Disabled Pets and local animal shelters.

“The concept of the band name revolves around ‘Jolly,’ having a damn good time while we are here,” said Rodvelt.

Cory Gallagher is a 2009 Washburn Law graduate who is planning on practicing law while continuing his part in local music as a drummer.

You can find Jolly Roger on Myspace at www.myspace.com/therealjollyroger.