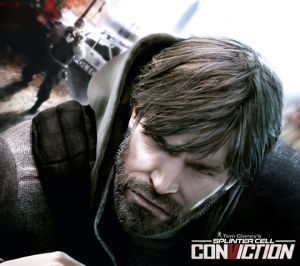 Sam Fisher returns with a vengeance in Tom Clancy’s Splinter Cell Conviction. As the typically cool and collected Fisher has been transformed into a revenge driven killing machine, some of the games key mechanics have been transformed accordingly. Sam’s anger is palpable and that ferocity is felt not only in the story but in the gameplay as well.

One of the first things you will notice in Conviction is the changes in stealth gameplay. The fundamental stealth aspect fans of the series have come to know and love are still present, but the integration of action elements make this Splinter Cell more approachable than past installments.

The surprisingly fast paced campaign features no loading screens and mission objectives are cleverly scrolled on in game structures in real time. Even when lurking in the shadows the game keeps you moving forward searching for the next opportunity to strike and take out enemies swiftly and silently.

Unlike previous Splinter Cell games, Conviction makes it easy to tell if you’re truly undetectable.  Enemies are unable to spot you in the dark or if you’re hidden behind objects. When in the shadows the screen turns black and white and when you’re back in the light the color immediately returns so you’re never unsure whether or not you’ll be spotted.

The cover system is reminiscent of games like Gears of War but with some key refinements. You can cover behind any object by holding L-trigger and can seamlessly move to near by objects by pressing A-button. Other controls in the game can be a tad clumsy especially when near an object you can climb on and a weapon you can pick up.

Splinter Cell Conviction gives you several options on how to eliminate your targets.  When you’re close enough you can sneak up behind enemies and perform hand-to-hand takedown attacks. After successfully performing one of these attacks you earn the ability to mark and execute. By simple tap of a button you can mark a number of enemies (based on the gun you are using) and are guaranteed a kill.

Aside from the single player campaign Conviction also offers several intense cooperative and versus multiplayer options. The co-op campaign provides some of the most thrilling and strategic gameplay out there. The stealth nature of Splinter Cell makes working with your partner essential to success, especially since if one of you dies you both fail the mission.  These aspects, along with the ability to mark and execute enemies together simultaneously, make playing cooperatively even more enjoyable than the single player campaign.

In spite of the few awkward control and level design moments, Conviction is an enjoyable game for fans and newcomers alike. The fast paced stealth combat immerses you in the dramatic and suspenseful single player and multiplayer campaigns.  Smooth, efficient and brutal gameplay makes Tom Clancy’s Splinter Cell Conviction a memorable addition to the series.

•    Cooperative play is a whole lot of fun

What’s not so Good:

•    Controls can be clumsy at times

•    Some Splinter Cell purists may not agree with all the changes