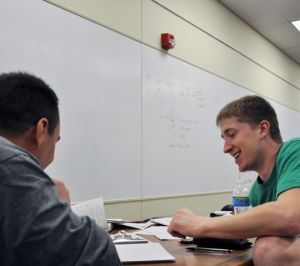 Librarians like their new offices, and students miss their old study rooms.

Anyone who has visited the library in the last two years has noticed the updates and improvements made to the main floor. Now the makeover has spread to the basement. The newest changes, geared toward improving the group work experience, were unveiled on April 3.

Along the west wall, a 360 foot white board was installed along with new group workspaces. The same wall is also getting a face lift. The old gray wall color is now a brighter, light yellow.

The microfiche archives, previously found in the basement, are being catalogued digitally, so the microfiche cabinets have been removed, freeing up space for study areas. And more room for study areas allows for the private study rooms to be converted into office space. Before now, librarians worked in cubicles, which did not provide the needed space for privacy when meeting with students said Judy Druse, assistant dean of libraries.

“This semester we have five librarians who are teaching eight sections of the information literacy class and they have to have office time,” she said.

The removal of the microfiche has allowed for more open study room, which students are using.

“I don’t like that they’ve eliminated the study rooms,” said Big H. Venkat, junior computer-science major. “But this is a good way to compensate for the eliminated study rooms. They ought to find a better way to allocate offices for staff.”

The stretch of tables along the west wall will stay, but poster board easels now separate each table, and Druse said whiteboard easels are on the way.

“Having a private study room is nice,” said Mike Weaver, junior. “Sometimes students don’t follow the rules for being quiet.”

Weaver said conversation in study groups could carry and disrupt other studying.

“There’s always pros and cons,” said Druse. “I feel like it was a necessity. We didn’t have a lot of options, and we know students aren’t happy with us for doing that. But we only have so much room and we have to make the best out of what we have.”

It’s all because of the microfiche.

Microfiche is a four-by-five inch piece of film containing microscopic, printed, information. When microfiche technology was introduced, it revolutionized the way libraries used their floor space—allowing them to carry printed resources that there wasn’t room for.

And now there isn’t room for the microfiche.

“Those archives will be available online so students don’t have to come into the library for full text resources,” said Druse.

Libraries all over the country are creating space by digitizing their resources. Three years ago, a large portion of general references were removed from the main floor of the Mabee because they were more easily catalogued in an electronic database.

Druse said if the resource was replaced digitally, the tangible resource was withdrawn. By “withdrawn,” Druse said, she means the books could have been put upstairs, left on the main floor or, sometimes, simply put in the trash. The library is unable, however, to sell any resource that has been withdrawn.

“There are state guidelines that tell us what we can and can’t do with materials,” Druse said.

Venkat said he would like to see the periodicals disappear in the basement since it is possible to catalogue it all electronically.

“Libraries now are more database and study area instead of racks of books,” he said.

But Druse said the books in the library won’t vanish any time soon.

“Technology changes,” she said. “There has been the advent of the TV, changes in radio and the Internet. When the Internet came along, people said there would no longer be a need for paper. But the book has been around a long time.”

So the periodicals will stay for now, but the rest of the library is likely to be subject to change.

To determine what improvements should be made, the library gathers information from multiple sources. It uses the Faculty Library Committee as well as the Student Friends of the Library Facebook page. For additional feedback, Alan Bearman, dean of libraries, said he would stop and chat with people using the library to hear their opinions on the new changes and what they would like to see in the future.

“I love this place,” said Tameka Willis, senior. “Everything you need is right in front of you.”

Mabee Library and Bearman continue to have big plans. In May, the English writing lab will move from Morgan to the library. The painting will continue in hopes of adding more color to the library.

Last summer, ISS installed six wireless internet access points throughout the library. Each of these access points can deliver Internet to about 350 laptops at once. When all the technology is up and running, the library will be the hottest wireless spot on campus. Bearman said he is always looking for more ways to create learning spaces in the library rather than just a place full of books.

“It is our job to give students the right material, at the right time, in the right place, and then teach them how to use it,” Bearman said.