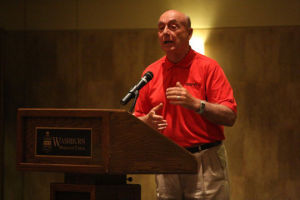 College basketball is defined by passion and pageantry. The screaming, excitement and thrilling contests are what separate it from any other sport.

The game’s most famous announcer can be described by all the same words, and that’s why he’s such a fitting ambassador for the sport he loves.

When ESPN televised its first ever NCAA game, Vitale was on the microphone. More than 30 years later, his role as a pioneer and fan continues to grow.

In 2008, he was inducted into the college basketball Hall of Fame alongside Hakeem Olajuwon and Patrick Ewing. Both players rank in the top 25 of the NBA’s all-time scoring, rebounding and blocks lists. On the court, the 7-footers’ accomplishments tower above Vitale’s. But on the sideline and beyond, Vitale’s contributions to the game make him just as deserving of enshrinement.

He coached East Rutherford High School to two state championships, the school he played for before an accident blinded him in one eye and ended his playing career.

He entered the college coaching ranks as an assistant at Rutgers, and after helping the Scarlet Knights reach the Final Four, he took a head coaching job at the University of Detroit.

With Michigan and Michigan State nearby, the Titans of Detroit are barely even a blip on the college basketball radar, but Vitale led his team to wins against both in-state goliaths, in addition to a victory against eventual national champion Marquette.

He turned Detroit into a 25-win program, then took a job as head coach of the Detroit Pistons. Despite struggling during his brief NBA coaching stint, Vitale never shied away from analyzing the games and players he coached.

Since then, he’s made a pretty good living of calling games the way he sees them.

You don’t have to be a basketball fan to have heard Vitale’s catch phrases. More people associate “Awesome, baby!” and “Diaper dandy” with the bald-headed, fun loving announcer than the number of fans who know last year’s national champion.

Vitale loves the attention that comes with his job, but his time in the spotlight is often used to benefit others. He’s the most vocal supporter of the Jimmy V. Foundation, which is named after his good friend Jim Valvano, a former coach who died of cancer. Vitale’s cheery eyes and smile turn to tears when he brings up Valvano’s fight. During games and at fundraisers, Vitale’s passion is evident once again as he speaks about finding a cure.

The 70-year-old announcer may draw criticism for the support he gives Duke and North Carolina, but if answering to Blue Devil and Tar Heel haters is the biggest problem in his life, Vitale knows he’s got it pretty easy.

He exclaims nearly every night on TV that he’s “the luckiest man alive” and he’s “getting paid to do the best job in the world.”

I was in attendance when he gave Nick Collison a standing ovation at KU. I’ve tuned in countless times for his calls of the ACC Tournament and the Coaches vs. Cancer Classic. The fact is, when you look down at the media table and see his shiny, bald head, you know it’s a big game.

He brings an unmatched level of energy to every arena he enters, whether it’s for a basketball game or a motivational speech. Inside that head, the “Vitale Bald Dome Index” as he calls it, is a wealth of information, not just about sports, but life and how it should be lived.

Even if you don’t watch basketball, Vitale puts on a show that is impossible to turn off. Whether he’s talking about sports, finding a cure for cancer or literally dancing his way through life in the middle of a student section, Vitale has a genuine passion for what he does. Tonight he will speak on a basketball court, at Lee Arena on Washburn’s campus, but the advice he can give and the motivation he provides goes so far beyond a simple game.