“Google” is now “Topeka”, at least for a day 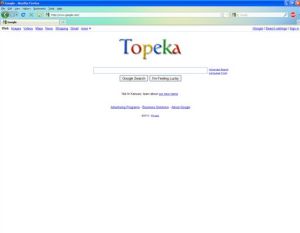 On April 1, 2010, people from all over woke up to find that on Google.com, the name Google had been replaced with Topeka.

Bill Bunten said, “Don’t be fooled.  Even Google recognizes that all roads lead to Kansas, not just yellow brick ones.”

Eric Schmidt, Chairman and Chief Executive officer, Google Inc.  wrote that he wanted to honor Topeka, Kansas’ moving gesture, and was pleased to announce that at 1 a.m. CST April 1, 2010, Google had officially changed its name to Topeka.

Google even had guidelines on proper ‘Topeka’ usage, such as “I did a Topeka search on him” and “I Topeka’ed him.”

Schmidt wanted to be sure and let people know that this initiative is a one shot deal that will have no bearing on which city is chosen to participate in their experimental ultra high speed broadband project.

Link to the official Google blog: