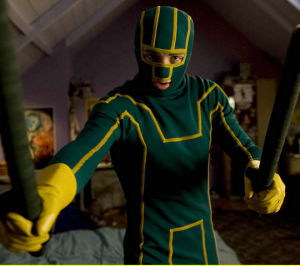 The first trailers I saw for “Kick-Ass” left me a little confused, I mean, if you heard there was a movie about ordinary people trying to be superheroes, and that one of them was under twelve years old, you would assume that it was a poorly-conceived kids movie. But they named it “Kick-Ass” and gave it an R-rating. Why? Because it turns out that “Kick-Ass” is less of a kids movie and more of a brutal imagining of some of the more plausible scenarios involving people dressing up and trying to fight crime.

“Kick-Ass” is centered around the main character and narrator, Dave Lizewski, a predictably hapless nobody in love with a girl who doesn’t know he exists. Dave is a guy with his head permanently stuck in the clouds. Tired of the constant muggings as well as the general cowardice and apathy of everyone around him, Lizewski buys himself a wetsuit and turns himself into Kick-Ass. After several weeks of training, most of which involved looking at himself in the mirror and trying to jump farther, Kick-Ass finally finds crime to fight! After what had to be months of extensive surgery and recovery from all his broken bones and the stab wound he incurred, Dave decides to try again and, armed with his now-damaged nervous system, he manages to defend a man he tripped over against a few gang-bangers. Barely. When footage of his victory goes viral, Kick-Ass finds himself forced to be a part of something he really was not ready for.

I have to say, I was mildly impressed with “Kick-Ass” because, aside from a few doubts revolving around a preteen girl’s physical ability to slaughter that many anonymous henchmen and her motivation for doing so, the characters and their reactions to what happens around them is pretty realistic. Once Lizewski’s dream becomes a reality he does not blindly accept it, he spends much of the movie questioning the wisdom of his actions and is almost constantly in over his head while looking for a way out of whatever he has done. Criminals are not looking to attack superheroes unarmed and one at a time, nor do they fall down after a single blow to lie unconscious, but remain alive for the remainder of the fight.

Overall, “Kick-Ass” is a thoughtfully believable twist on the superhero origin story with a few good laughs and some engaging fight sequences that is worth the time, provided you do not have a problem with the aforementioned young girl spewing obscenities and killing dozens of people in very violent ways.