Koyotes cruise to 61-14 win against Mustangs 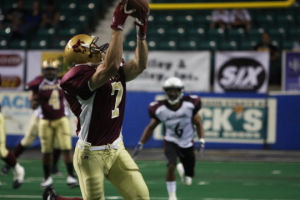 It was another blowout victory for the Kansas Koyotes.

Following their 78-6 win in the season opener, former Washburn quarterback Jordan Brill went 14-for-23 and threw for 164 yards as the Koyotes scored 27 points in the first quarter on their way to a 61-14 victory over the Missouri Mustangs Saturday night at Landon Arena.

Linebacker Morgan Dewey, who had an interception in the game, expressed that even at the early point of the season that this team has already developed confidence, which could be seen early on.

“For first year players, it helps to have a lot of Washburn guys. Coach (Craig) Schurig built that program. We know how to win and that’s all we want to do is win,” said Dewey.

Starting the game, Stevey Townsel scored on a 50-yard kickoff return to give the Koyotes a lead they’d never surrender. The Mustangs held Kansas to only six points in the second quarter. The one touchdown came on their longest reception when Brill connected with fellow Washburn alumnus Justin Wrecke for a 36-yard play. Wrecke led Kansas with nine receptions on the night for 90 yards.

The teams swapped scores in the third quarter, as Missouri finally got on the scoreboard with 42 and 37-yard passes to Douglas Wendel from backup quarterback LaKaito Barr-Miller after starter Joseph Miller went down with an injury in the second quarter. Barr-Miller made the first two-point conversion but was stopped on the following attempt. After three quarters, the Koyotes held a 47-14 lead.

Kansas’ Mike Steen picked up two touchdowns in the fourth quarter, both on two-yard rushes. He ended the game with six carries for 43 yards. Chris Thompson made both extra points and only missed two out of nine attempts as the Koyotes wrapped up the victory.

Their next opponent comes to Landon Arena this Saturday in the form of the Iowa Blackhawks, the defending American Professional Football League champions. The Blackhawks (3-0) defeated the Junction City Force in their most recent outing 87-28.

But despite a different level of competition, Koyotes head coach Jim Green doesn’t plan on changing anything this week during practice.

“We prepare the same, no matter who we’re playing. Whatever the score happens to be at the end of the game is just what happens,” said Green. “We’ve given up 20 points in two games in arena football. I don’t really think we have a whole lot to change right now.”

Wrecke was sure that the players would feel a different sort of motivation as they planned for Iowa.

“I know this week in practice it’s going to be easy to go every day. We’re just looking forward to the opportunity,” he said.

Brill also had the same sentiment, especially knowing the outcome of this weekend’s game may end up having a lot of influence on the position of the two teams as the APFL playoffs roll around in July.

“We’ve had two really good games. But we’re really going to be tested next weekend and we’re definitely going to have to bring out “A” game because they’re going to be ready for us.”