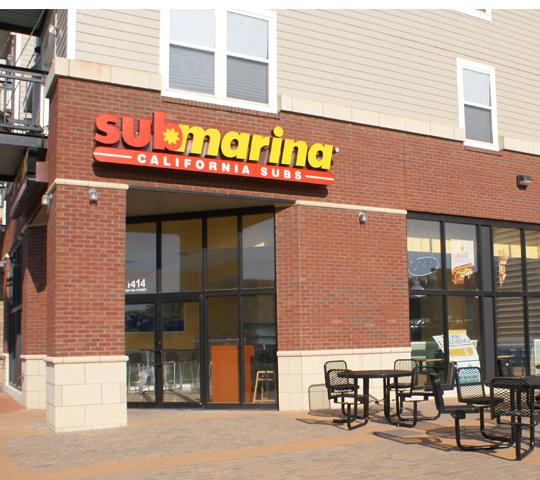 Ghosts of Nothing Submarina, the only restaurant to open at College Hill, only lasted one year in the complex. A majority of the retail spaces and all of the town homes are currently vacant, causing the City of Topeka to absorb the budget shortfalls for the project.

The 24,000 feet of retail space hidden under the College Hill Apartments continues to remain vacant.

In 2006, the College Hill Business District was demolished to make way for 183 apartments, 33 townhomes and 24,000 feet of retail space. Three years later the apartments are about 75 percent occupied but the retail space and the townhomes sit empty. On April 1, the partners of Washburn-Lane Parkway Renovation LLC entered into a contract with a retail brokerage firm out of Kansas City with hopes of pumping some life into the area.

So far, one restaurant has given the College Hill development a shot. Submarina California Subs opened in January 2009 but closed December 31. With Subway so close to campus, the higher prices of Submarina made it hard to compete. Currently, the Graphic Arts Gallery calls the space at the corner of 17th and Washburn home. Owner Lance Johnson would like to turn the space into a hangout for students.

“We have tables and Wi-Fi. Students can come over, hangout and enjoy the art,” Johnson said.

Washburn-Lane Parkway Renovation LLC is required to repay the TIF bonds it received to break ground on the development. The property and sales tax revenues have fallen short of the scheduled debt service payments. The city has had to absorb the shortfalls, so the pressure is on to bring in new business. The partners remain optimistic and feel their new partnership with the brokerage firm, Block & Co. Inc, will help them lease out the spaces. The retail area leases for $14.50 per square foot monthly.

With all of the open spots, people have formed their own opinions as to what they would like to see settle in. Heather Payne, who works in the College Hill Apartments Leasing Office, would like to see something like a coffee shop.

“Anything to attract people to the area would be good,” Payne said.

Kathy Menzie, interim chair of the Mass Media Department, has lived in the complex for about two and a half years. She is torn about the retail spaces filling up.

“I have mixed reactions. It would be nice to see the space filled but they probably won’t let us park in front anymore. I like to park in the front,” Menzie said.

Menzie agreed a coffee shop would be a nice addition to the area. She also expressed a desire to see a CVS move in.

“They tend to take advantage of urban areas,” Menzie said. “It would be nice to have one downstairs.”

Johnson also mentioned the idea of bringing in some kind of coffee house as well as places to shop.

Despite the empty retail spaces, the partners see the development as a positive improvement to the area. They hope that filling those locations will only make it better.