The Washburn Review • May 3, 2010 • https://washburnreview.org/16747/arts-entertainment/topeka-musician-acoustic-alchemist/ 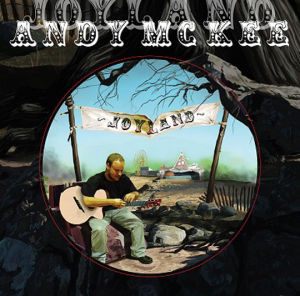 Andy McKee is no stranger to accolades or recognition. He’s taken third place at Winfield’s Walnut Valley Festival. He’s had three of the most watched videos of all time on YouTube with more than 78 million combined views. He’s performed on the Carson Daly Show and has met, toured with, or recorded with some of his idols. Still, it was unexpected that Lindsay Lohan mentioned him in one of her tweets on Feb. 18 when she shared with all of her followers that she’d just downloaded one of her favorite songs, “Rylynn” by Andy McKee.

For McKee, the path from Topeka,  to Internet sensation and guitar phenom has been a long trip. He started playing guitar at 13 and immersed himself in the music of Eric Johnson, Metallica, Dream Theater and others, absorbing what he could from his cousin Richard Kimzey and taking lessons from local guitar teacher Ron Fields. It was Kimzey who introduced him to his passion and what would help to shape and define his musical identity at 16, by taking him to a performance by solo acoustic fingerstyle guitar player Preston Reed at the Classic Bean. McKee was so enraptured by Reed’s performance that he bought one of Reed’s instructional videos and began teaching himself the techniques of that style of playing. This opened a door for him that led to similar artists like Michael Hedges, Don Ross, Tommy Emmanuel and Doyle Dykes.

Around the same time, he earned his GED and dropped out of Washburn Rural High School to focus full time on the guitar. Soon he was teaching guitar at Steam Music & Pro Sound and writing his own songs. He began playing and bonded with many of the local musicians, leading to his recording debut in 1998 as a special guest on the song “The Haybailer” on the band Soundescape’s eponymous album.

In 2001, he released his first album, “Nocturne,” independently and followed it up by competing in the world-famous Walnut Valley Music Festival in Winfield, Kan., taking third in the national fingerstyle championship category. The recognition he received for that earned him a spot on his first international tour through Taiwan.

He continued writing, recording and touring, releasing his second independent release, “Dreamcatcher,” in 2004. This album caught the ear of independent label Candyrat Records, who signed him to their label in 2005 and put him in the studio to make “The Art of Motion.” In an attempt to promote their new artist as he was recording, the label released a series of videos on YouTube featuring just McKee and his guitar, performing many of the songs from his first two albums. The video for his song “Drifting” became an instant hit as people watched in amazement at what he was able to do on an acoustic guitar. The videos for “Rylynn” and a cover of Toto’s 1983 chart-topping song “Africa” followed suit and, based on the success of these videos, he was asked to perform on the Carson Daly show.

McKee’s time on the road increased with his popularity and success, adding stamps from countries all over Europe and Asia to his passport. In 2007 he made a guest appearance on Josh Groban’s multiplatinum, Grammy-nominated Christmas album “Noel.” He started out 2008 by releasing his second solo album for Candyrat, “Gates of Gnomeria,” along with the collaborative album “The Thing That Came From Somewhere” with one of his early influences, Don Ross. The two toured together and became good friends.

In 2009, he toured for part of the year and took time off to relax and also write and record his first album for the label Razor & Tie, “Joyland,” released March 30, 2010. He is currently on tour in Europe through the first part of May and will begin a tour in the United States upon his return.