The Washburn Review • May 5, 2010 • https://washburnreview.org/16701/sports/washburn-tennis-teams-prepare-for-ncaa-tourney/ 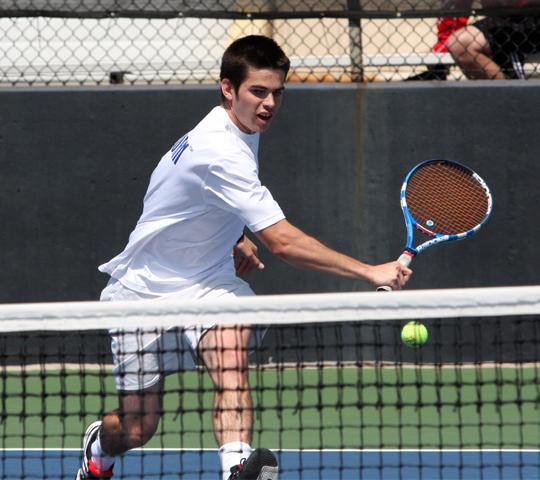 The big dance Washburn’s men’s and women’s tennis teams qualified for the NCAA South Central Regional Tournament, and hope to come home with a national title. The men (13-7) qualified despite losing in the MIAA Tournament, but the women (14-5) won it.

It’s simple at this point for the Washburn men’s and women’s tennis teams as they enter the NCAA South Central Regional Tournament. Win or go home.

In semifinal match-ups that start tomorrow in Abilene, Texas, WU’s tennis teams will be entering the proving point of their seasons.

The men’s team (13-7), which made it into the tournament due to a strong season, will play Incarnate Word (11-2) at 11 a.m., while the women (14-5) will play Abilene Christian (23-7) at 3 p.m after winning the MIAA Championship for an automatic bid.  The Washburn men played Incarnate Word earlier this season in San Antonio, Texas, with Incarnate Word winning 5-4.

Washburn tennis coach Dave Alden knows both teams will need to be on their game and would like to see the men avenge their loss against Incarnate Word.

“This section of the bracket couldn’t have set up any better. We played Incarnate Word when it was our sixth match in seven days. We weren’t nearly at our peak from a physical standpoint but yet we played them in head match points,” said Alden. “If we can play them at that level after what we went through to get to that match, we feel confident this is more than doable.”

After not playing for a week and a half, the games could provide a bit of nerves and rust. But Alden’s been trying to make sure the players are prepared as well as they can be.

“We’re as prepared physically as we can be. We’ve played so many matches like most teams and we peaked at the right time,” said Alden. “We had a couple days off to heal last week, but we’ve really focused on trying to get everyone prepared and get everyone caught up with their studies so they can go down and just compete and not have any external pressures.”

If both teams win, they will go on to play on Friday in the finals, also played in Abilene. The men would play Abilene Christian (16-11) at 10 a.m. and the women would play the winner of the Central Oklahoma (15-6) and Incarnate Word (12-2) match at 12:15 p.m. The women played Incarnate Word earlier this season also in San Antonio and lost that match 8-1.

Despite the outcome, either win or loss, Alden just wants to see a strong and honest performance from his team and know there was nothing else they could’ve done.

“It all kind of relates back to something I’ve said all year. If you have the attitude and effort in the right place, then most of the time the results will take care of themselves,” said Alden. “That’s the biggest things I’m looking for at this point of this point in the year when we go into it and just want us to never quit. That’s all I can ask for.”

And both teams recently had players make the first team for MIAA and Alden was named the MIAA Women’s Coach of the Year.

The finals, if either or both teams make it, will take place May 12-15 in Altamonte Springs, Fla.