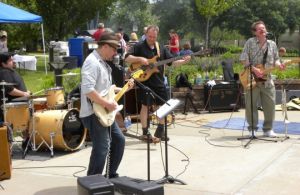 The Washburn Memorial Union took Scorch on the Porch to a whole new level last Wednesday, June 9, with its first ever summer Scorch.

The Union normally hosts three Scorches per semester, and has for the past nine years.

“We’ve done it ever since they finished the food court,” said Kathy Reiser, the event planner.

She said that when the food court was initially finished, the members of the memorial union saw the sweeping porch and steps as the perfect place to host entertainment for the students.

“This is the first time we’ve done one in the summer and we are really glad we did,” said Reiser. “It’s been really well-received.”

And well-received it was. The porch was filled with Washburn employees, students and community members gathered to eat the $5 meal provided by Chartwells and listen to the music of the Back Porch Blues Band.

Kurt Morrow and Kevin Hoover, two Washburn alumni, got the band together specifically for the purpose of performing at Scorch on the Porch, and hope to continue playing in this venue. They played a blues-rock mix of songs that utilized a variety of instruments from the standard guitar, drums and bass to the trumpet and harmonica.

“I’ve heard the drummer several times,” said Addison Frei, a recent graduate of Lawrence High School, who was on campus for the Sunflower Music Festival. “I’ve heard him play all different styles and he’s excellent.”

Frei said the Scorch music provided by the band was a nice change of pace from the classical music that the Sunflower students spent the day engrossed in.

Shelly Holmes, a teacher in Arizona and a former Washburn adjunct, said she came to listen to the band while she brought lunch to her nephew, Ethan, who was taking an art class at the Mulvane.

“We saw the sign for this the other day and thought, ‘Hey that’d be cool to eat lunch and listen to music,'” said Holmes. “I’m glad we came, they’re actually playing songs that I know. They sound good as far as I know music.”

After this first summer success, Reiser said she would like to continue with two more Scorches before the start of the school year, with no regard to the tumultuous weather conditions of the summer.

“The weather is always a concern, but if it gets too hot, we’ll just move it inside,” said Reiser.