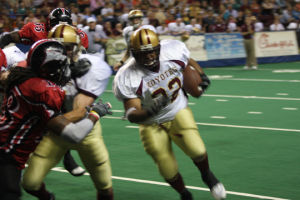 Coming off a three game losing streak, the Kansas Koyotes were ready to get back on track.

Behind a solid performance from quarterback Jordan Brill, who threw for 219 yards and two touchdowns, they did just that as Koyotes ousted the Springfield Wolfpack 58-47 Saturday at Landon Arena to get back to 3-3.

Donnell Smith, who scored the Koyotes first three touchdowns, was proud of his team for their game.

“It was a great effort and a great team effort,” said Smith. “We came out hard and we fought hard. I loved it.”

Two plays from scrimmage into the game, Smith made his first strong run up the middle to give the Koyotes (3-3) an early 6-0 lead after a missed extra point. However, Springfield answered back quickly with a 3-yard touchdown rush. After the extra point, the Wolfpack (4-3) lead 7-6.

The early competition got the excited and noticeably larger crowd into the game. The team had been handing away free vouchers to the game the week prior to be exchanged at the box office for a $1.50 ticket, and according to Brill, it gave the team a jump from the get-go.

“We were thankful everyone showed up,” said Brill. “We were nervous about what would happen but we came out to a good crowd who hopefully had fun.”

Springfield took an early advantage in the second half when Justin Gerald scored on a one-yard run but the Koyotes would erupt for 24 straight points to take a 51-35 lead. Springfield would cut the lead to 51-42 on another Gerald touchdown from Wolfpack quarterback Derek Rasmussen, but a Koyote touchdown by Robbie DuBois would give them a 58-42 lead.

A late Wolfpack fumble recovery for a touchdown became too little too late as the Koyotes held on for the victory. Kansas’ three interceptions during the second half to helped pave the way.

Brill found part of the night’s success to be the Koyotes’ unity during this week’s practice.

“This week our main concern was being unified as a team,” said Brill. “We came out, we had fun. We knew we were a better team than what our record shows.”

The Koyotes will travel to Sedalia, Mo., to face the Mid-Missouri Outlaws on Saturday. The Koyotes lost to the Outlaws 56-46 when the teams played at Landon Arena May 22.