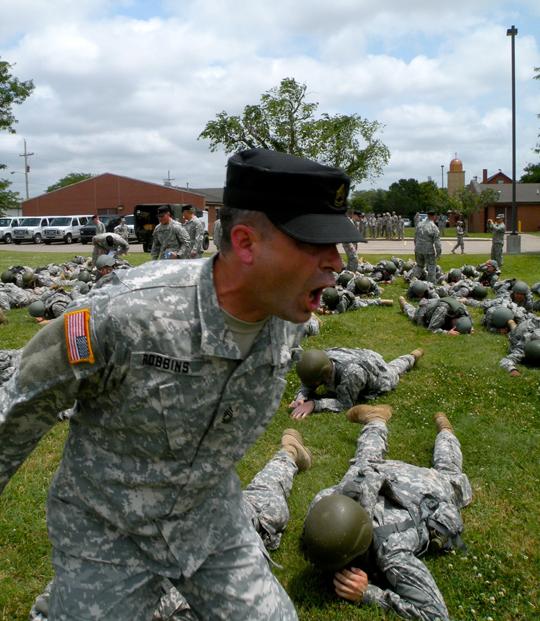 SFC Robbins in the black hat is a Platoon Trainer for OCS. He sternly motivates the officer candidates as they low crawl across the field within a few hours of in-processing in Salina, Kan., on June 13, 2010.

On June 14, 2010, soldiers in the Officer Candidate School (OCS) at Salina, Kan., woke up 4:30 a.m. to the not-so-soothing sounds of their company platoon trainers cajoling them from their bunks.

These soldiers moved with a purpose, grabbed their M-16 A2 training aid, donned their fully loaded ruck sacks and went on a five mile road march. This was all completed before 8 a.m., when most people were just getting to work, and this is just a small portion of the demands that they must endure this day.

During an average day, candidates sit through classes on military procedures and leadership and, during their ‘breaks’, they are ‘motivated’ by their platoon trainers for a session of rigorous physical exercise. Did you ever get bored with a simple nine-to-five job? Well, these candidates might hope to see their pillows at around 10 p.m., if they’re lucky. This is business as usual for an officer candidate who is earning the right to become a commissioned officer in the oldest fraternity, a leader of men and women, and defender of the United States Constitution.

Among the distinguished members of the OCS class is Officer Candidates (OC) Andrew Wolfe, a graduate of Washburn University (2005) with a degree in Bio-Chem. He is a prior enlisted Marine Infantryman and hopes to use his experience to lead an Infantry Platoon. He’s accompanied by fellow alumnus OC Lucas Osborn (2004), who majored in Music and Education. They’re followed by OC Joseph Swann, a senior, who hopes to join the Military Intelligence community.

Of course, being in the Army is not without its perks. In celebration of the Army’s 235th birthday, the youngest and oldest candidates cut a cake with military sabers and they’ll take part in this grand old tradition among comrades. Their experiences and lessons learned will forever alter them; they will stand taller, they will operate better under pressure and become more competent, capable and confident than their non-military peers.

Graduates of OCS will receive their commission as officers in the United States Army. They look forward to the leadership opportunities in the Army, starting off by leading roughly forty men and women as a Platoon Leader, to possibly commanding their first company of over a hundred soldiers in four years as a captain.

They will embody a warrior who is physically and mentally tough.

Captain Keith D. Pangburn graduated from Washburn University in Topeka, KS with a Law Degree and now holds a full time position as an Army Logistician for the state of Kansas and is the Logistics Officer for OCS Phase I.

“The well had just dried up,” said Pangburn. “They were under-paying lawyers everywhere in this economy. When I see people I graduated with, they just look so haggard and tired. They’re definitely not getting the salary that you’d expect a lawyer to get.”

Commissioned officers will continue as members of the Army National Guard, drilling one weekend a month and two weeks a year with a full time civilian employment or they can find a Technician Job or Army Guard/Reserve (AGR) as a full time soldier in their home state.

“I’m glad I had the Army to go to,” concludes CPT Pangburn as he looked over the OCS parade field, “I wouldn’t trade it.”