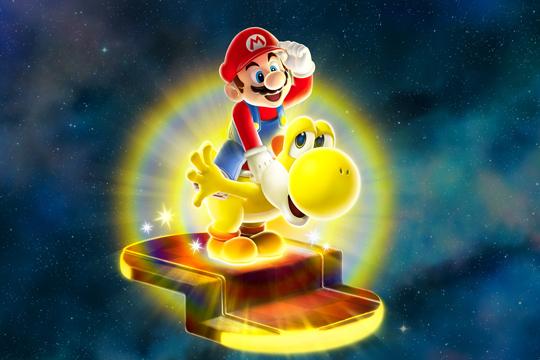 “I’m huge!” says Bowser in the opening sequence of Super Mario Galaxy 2, this statement not only goes for the 1,000-foot-tall King Koopa, but for the entire Mario galaxy.

Although the Mario Galaxy in Super Mario Galaxy 2 is huge, it is presented in a much more slick and concise way than previous 3-D games, incorporating some classic elements from its 2-D predecessors. This is evident in the addition of a map that allows you to jump right in to the next level, eliminating any aimless wandering around and unnecessary downtime.

As the game cover alludes to, Galaxy 2 brings Yoshi back into the 3-D Mario world. This is one of the best aspects of the entire game. Not only does Yoshi do all of the same classic moves we would expect, he has new abilities and controls that feel just right and add to the problem-solving, high action experience.

Any Super Mario review would not be complete without mentioning the power-ups. For those of you who felt something was missing from the first Galaxy, this is it. Along with power-ups seen in past Mario games, Galaxy 2 adds many new ones fostering a varied gaming experience. A new “rock suit” allows Mario to roll in a ball, crushing enemies and allowing for some extra creativity and diversity to gameplay. The “cloud suit” also adds new strategy and fun to the Galaxy series by allowing you to create several temporary platforms.

The multiplayer option has been expanded and now player two can not only assist Mario in jumping to safety and collective star bits, but can also access areas that Mario on his own cannot.

Give it to Nintendo to democratize gaming even further with Galaxy 2. Longtime fans of the Mario series can appreciate the game just as much as casual newcomers. While anyone can enjoy playing through the levels, the overachiever will really appreciate all the little things Galaxy 2 offers. Each of the galaxies has a hidden coin that can be collected which unlocks extra missions, forcing you to explore levels even further.

Every single aspect of this game is designed to induce a gleeful, child-like wonderment unmatched by any current platformer. Vibrant colors, nostalgic music, challenging gameplay and fun new power-ups come together to create a brilliant 3-D spectacle, making Super Mario Galaxy 2 one of the best Nintendo games of all time.