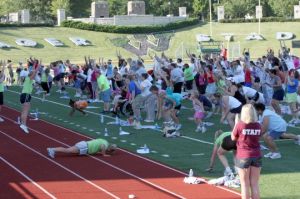 Yager Stadium at Washburn University has seen many workouts over its career, but none at the level of Thursday evening’s “Shawnee County’s Largest Workout.”

With 500 pre-registered participants, the workout coordinators expected about 200-500 walk-ins. The event started at 6:30 and had group exercises ranging from lunges and squats to crab walks and jumping jacks.

Beth Gardner, the community relations director at the YMCA, was also on the planning committee for the workout.

“They asked for someone that was in the fitness arena and I jumped at the chance,” she said. Her work as a personal trainer gave her the experience necessary as she chanted out the various exercises for the body of participants.

She said they patterned this event after Lawrence’s “World’s Largest Community Workout” which was exactly a month ago.

“We were wanting to make it more festive, and a little more of a fun event,” said Gardner. “I think it’s amazing. So many people say that Topeka doesn’t support its events. Well, we’re out here proving them wrong in 98 degree weather.”

Many of those involved in coordinating the event were volunteers, but some, such as Don Jenkins, were there from the Shawnee County Health Agency, giving their support and providing water and resources when necessary. An ambulance was on standby just in case.

“We’re expecting people to use this to kick-start a healthy lifestyle,” said Jenkins, “We’re not here for any heavy cardiovascular stuff.”

Jenkins’ son, Tyler, was there doing his part. Tyler is the vocalist of the band New Inhabitants, based out of Lawrence. They began playing when registration started so that workout participants could warm up to their indie-pop mix of both self-written and cover songs.

Tyler said this kind of event was important to him outside of just providing the band with a venue to play at.

“I’m a male nurse…I work in the rehab unit, and I see a lot of people whose [medical issues] would have been prevented if they had been more active and health-conscious,” he said. “It was definitely not just another gig.”

Hairm and Donna Beaver, 71 and 70 (respectively), are both retired Topekans who attended. They boasted that they have lost a combined 57 pounds since November, and were using the workout as a way to keep them on track.

“We figured there’s a workout here, and it’s the biggest one, so why not come?” said Hairm. As they discussed the reasons for their improved health, Hairm mentioned cutting down on alcohol intake, as well as diet and exercise, “I fired Jack Daniels, and I fired Bud Light. I still have them in our fridge and they’re just daring me [to be healthier].”

“I think you just have to take care of yourself,” said Donna, something that she said has been hard for her between multiple strokes and bouts of cancer.

Despite the hardships of their health, the Beavers, who are getting ready to celebrate their 40th anniversary, were out sweating with the rest on the field in Yager Stadium.

“Things like this are about getting people off the couch and getting involved,” said Hairm. “Some people might exercise about 50 percent more after going to this.”