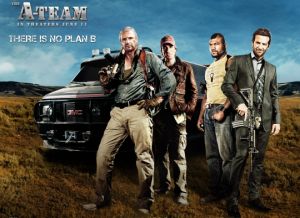 As far as summer action movies go, “The A-Team” is one of the most entertaining since “The Dark Knight” hit the big screen in 2008.

It combines the basic plot of the beloved 1980s TV series, which popularized Mr. T’s “I pity the fool” catchphrase, as well as well-known actors such as Liam Neeson (“Taken” and “Clash of the Titans”), Bradley Cooper (“The Hangover” and “Wedding Crashers”) and Jessica Biel (“Seventh Heaven” and “I Now Pronounce You Chuck & Larry”) and the comedic talents of relative-unknown Sharlto Copley as Murdock and MMA fighter Quinton “Rampage” Jackson as B.A. Baracus¾ along with a heavy dosage of explosions and violence¾ to create one of the most explosively entertaining movies of 2010.

Neeson plays Col. John “Hannibal” Smith, the leader of the band of four ex-Army Rangers. Cooper plays Lt. Templeton “Faceman” Peck, Hannibal’s right-hand man who is often prone to jumping into the fray rather than making plans. Baracus is characterized as a bad mamma jamma with a terrible fear of flying thanks to Murdock, the group’s clinically insane pilot. The plot centers around the group’s wrongful imprisonment, their escapes and their mission to clear up their names of the crime they didn’t commit.

In the drawn out opening scene/credits, the four characters meet partly by coincidence and partly by plan as Hannibal attempts to save Peck from being burnt to death for sleeping with a Mexican man’s wife and escape back to America. Easily the most interesting character is Murdock, who they bust out of a loony bin to fly them home. In the first 10 minutes of the movie, you see his attempts to escape the mental hospital by jump starting a van (epic fail), his attempts to stitch up Baracus’ arm (he stitches a lightning bolt into his arm while pretending to be a doctor) and him hanging from the helicopter’s blades as it slows spins, singing “You spin me right round, baby, right round…” Without a doubt, Copley earns his comedy stripes for his portrayal of Murdock.

Later in the movie, the group flies a tank by using the recoil from shooting the cannon to steer and slow the descent as it falls from an exploded plane, in the meantime taking out two predator drones. This movie is literally action-packed, taking only a few brief breaks from the action to dispense background information and make a handful of jokes. It is equally as funny as it is action-packed, and the sexual tension between Bradley Cooper and Jessica Biel ignites this powderkeg of humor and violence.

To be frank, I pity the fool that doesn’t see this movie.