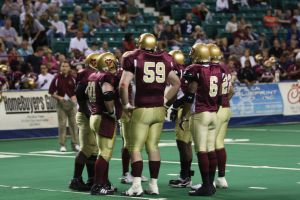 Jim Green’s last Kansas Koyotes home game went as if it had been scripted.

Taking a 34-6 lead into halftime after taking advantage of many Junction City Force miscues, the Koyotes (5-5) kept the heat turned up during the second half on their way to a 54-18 victory to advance to play the Iowa Blackhawks in Cedar Rapids, Iowa, next weekend in the American Professional Football League playoffs.

Green, who will retire at the end of the season as the Koyotes head coach due to health problems, was ecstatic about his team’s effort and how they used the recent events as momentum. Green is the APFL’s all-time winningest head coach.

“I know the guys rallied around the situation. Even in the locker room, it was a whole different atmosphere than it has ever been. You could feel the unity and chemistry,” said Green. “We’ve talked about that all year, but for some reason this time, it was so much closer. That’s what we were looking for. That’s the spark that will get them doing great.”

The Koyotes put a touchdown up early when Justin Wrecke turned a Jordan Brill pass into a 41-yard touchdown reception. Chad Reine, taking Chris Thompson’s place at kicker, would add the extra point to give the Koyotes an early lead. The Force quickly struck back with a 4-yard reception to Felix Moret but a missed two-point conversion left the Koyotes with a 7-6 lead with 4:55 left in the first quarter. This is the closest the Force would be to the lead the entire night.

Junction City (0-5) had its chances the rest of the half, but the Koyotes made four interceptions and caused the Force to cough up the football on two occasions, leaving the Force in a bit of dismay as the first half came to a close.

Jeff Summers, interim coach for the Koyotes for the remainder of the season, saw the defensive play by the Koyotes to be huge.

“The defense turned it up this week,” said Summers. “They weren’t really happy with themselves after last week [52-26 loss at Iowa.] We let some things slip out of our hands and we definitely came out hard tonight.”

The second half started a little more promising for Junction City as Charles Smith dashed 7-yards into the endzone for a Force touchdown, but they missed the extra point, leaving the score at 34-12. The Koyotes struck back quickly with a 41-yard strike to Brady Hoffman to give the Koyotes a 40-12 lead¾ Jordan Brill’s fifth touchdown pass of the night.

“We knew the last time we played Junction City, we had a lot of opportunities to go deep and we tried to take advantage of it tonight,” said Brill.

The quarter would end after both teams scored a touchdown, leaving the score at 47-18. Early in the fourth, the Force came as close as the half-yard line to a touchdown, but the Koyotes came up with an interception from Henry Talley III on the ensuing play. After the play, unsportsmanlike penalties were called against the Force, which ended in an ejection of Junction City’s quarterback Chris Vercher.

Late in the fourth, DaWight Benning, who replaced Jordan Brill at quarter, presumably to keep him uninjured for next week’s game, took a quarterback sneak into the end zone. A Reine extra point gave the Koyotes their final score of 54-18.

And after the game, as players and fans began to leave the field, Green had something he needed to tell the team.

“Tonight before we leave, I’m gonna’ tell ‘em that my spirit will always be there. I told them that I’ll be up in the stands next season,” he said. “They know what we stand for. We stand for pride and we stand for unity and if the chemistry’s right, we can do anything.”