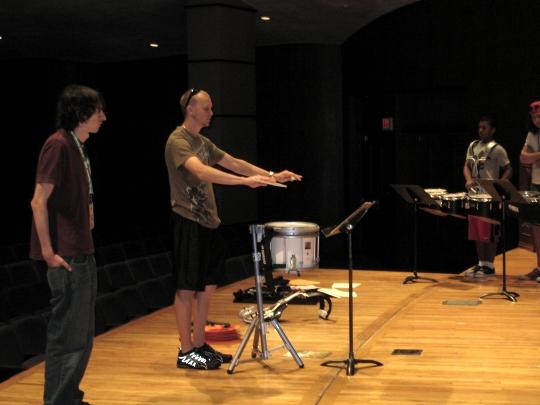 Tom Morgan, director of percussion studies at Washburn, directs a group of students at the Northeast Total Percussion Camp in White Concert Hall. The camp is in its sixth year of existance and is one of the only camps of its kind in the state.

As White Concert Hall vibrated on every level, Brandon Graves addressed the students in front of him, slamming his mallet down on the drum in front of him.

“That’s a triple forte, that’s like the only time all week where you’ll get to play as loud as humanly possible…and not get in trouble for it,” said Graves.

This is the Northeast Total Percussion Camp, like no other camp at Washburn University—or in the state for that matter. A four-day retreat that features all aspects of percussion playing and technique, this camp is in its sixth year running under the direction of Washburn’s Tom Morgan, director of percussion studies in the music department. The 47 attendees ranged grades 7-12 from schools in Topeka to schools in Wichita and Missouri.

“Obviously it’s a good recruitment tool, we get to know some of the good percussionists around the state,” said Morgan, “It’s a great way to just promote percussion.”

This camp takes a different perspective on teaching percussion rudiments, combining the basic drum lines and drum set practices with other types of drumming such as hand drums and classical techniques. Students also learn about varieties of percussive instruments, like the xylophone and marimba.

“That was a goal from the outset: to expose students to the gamut,” said Will Arasmith, a Washburn percussion 2009 graduate who came back to help with the camp. “It has really helped me refine my teaching technique and better my own skills.”

Many of the instructors at the camp are Washburn students, which Morgan said makes the camp even more well-rounded and beneficial.

“They get the chance to teach, which many of them don’t have experience at,” said Morgan, “It’s a win win win win. We all get a lot out of it, and it’s good for Washburn.”

Andrew Risch, a senior at Shawnee Heights High School in Topeka, was participating in his second year at the camp, and also enjoyed the amount of Washburn student involvement in the program.

“They’re really knowledgeable about pretty much everything but they’re close to our age so they can relate, it’s really cool to have teachers that you can also talk to as friends,” he said.

This year’s program owes many of its thanks to Brandon Graves, a clinician from Yamaha’s Sounds of Summer program, and also a current Washburn student.

“It would be a good thing to thank the Yamaha corporation,” he said, because it provided most of the literature for the camp as well as some of the instruments that he used.

The program has gone fairly smoothly this year, which Morgan attributes to the involvement of Graves and the department secretary, Brad Merriman, as well as his experience with the program.

“It’s a tremendous amount of work organizationally,” he said, “but after five camps, I know how to anticipate a lot of things that go wrong.”

Morgan would like to continue to promote this camp and its uniqueness, and wants to see the program grow.

“I’d like to see 100 kids here someday,” he said. “This could be the premier camp of the Midwest.”