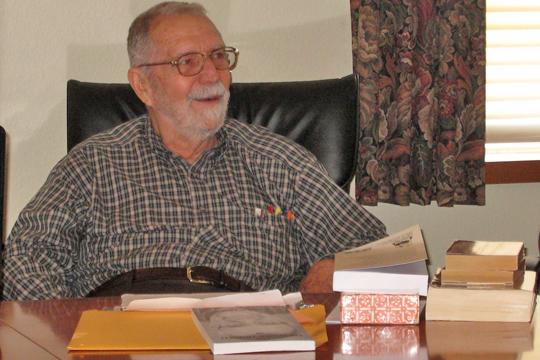 Robert Lawson returned to Washburn’s campus this Thursday, but it wasn’t to grade papers or pass out exams. The retired professor of English came to promote a publication of his own, “The Bridge of Dreams,” which was being discussed by the Washburn Book Club.

Lawson brought his grandson, Alexander, to help display his website and its new features.

“We’re currently putting up the whole novel so you can read it online,” said Alexander.

He said they are also working with audio books in the hope of eventually putting up the whole book for people to listen to off of the website. Alexander played a demo of Lawson reading the sonnet with a musical accompaniment, which was greeted by applause.

“This is kind of a new era of books,” said Martha Imparato, a Mabee Library employee, and one of the many Washburn employees in attendance at the discussion.

The novel is written in the style of a memoir of the main character, Jack Curtis, who details his tumultuous relationships with the women of his life, including his ex-wife¾ who continues to be his “muse” even after her death—his wife, his employer Countess Rostovna and his daughter.

Lady Murasaki Shikibu, who wrote “The Tale of Ghenji,” inspired the Countess’ character. The last chapter of her book is where Lawson took the title of his own novel. “The Bridge of Dreams” is metaphorical for Lawson, who says that, to him, it is indicative of the journey one takes when exploring literature.

“The Tale of Ghenji” inspired Lawson so much in his writing and in his life that, although he has already read several translations, he has just started on yet another.

“I wouldn’t mind other people joining me in reading the 1,200 pages, but I won’t unduly encourage it,” Lawson said. “I wouldn’t want anyone who’s not as enthusiastic [to force themselves].”

Lawson’s novel is very numerical, and shows off Lawson’s “Pythagorean” side. It has 24 chapters, each with 20 pages because, “Twenty-four is divisible by everything.” Lawson explained why his book has a numerical orientation.

“I write sonnets. You know you’ll have exactly 140 syllables when you start.”

Lawson, who is going to celebrate he and his wife’s 60th anniversary in October, said that though it hasn’t sold quite like he expected, the novel was well received by those who did buy it. His sister told him she heard his voice reading it the whole time.

“It ought to be my voice,” Lawson said, “Jack is just like me, except that he’s had more exciting experiences—and more women.”

Lawson’s book is available in the Washburn Bookstore. More information can be found on Lawson’s website, www.thebridgeofdreams.com.