PMtoday on the rise after signing with Rise Records 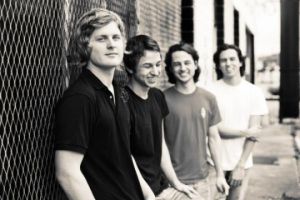 Since forming in 2003, it’s safe to say that PMtoday isn’t afraid to have its own sound.

Playing their first set in Lawrence since being signed to Rise Records, the Jacksonsville, Ark., based band showcased many of their newest songs on July 26 at the Jackpot Music Hall. It was their first show with Abandon Kansas and the Noise FM after they’d gotten off of a tour with Hawthorne Heights the day prior.

They can be best described as progressive rock with indie influences and are comprised of lead singer Connor Brogan along with his brothers Cuinn and Ryan on guitar and drums respectively and bassist Jerrod Morgan. All four members of the band have some vocal responsibility in their songs. They released their most recent album In Medias Res on April 6 after being signed to Rise on September 26, 2009. Knowing the term was of Latin descent, Connor was able to elaborate more on the meaning of the phrase.

“In some sorts of literature, like epics, basically it means that you start in the middle of a story and you tell the story through flashbacks of what happened. It means ‘into the midst of affairs,'” he said.

Their sound, according to the band, is actually from a combination of others. Their guitar-driven formula mainly comes from the father of the Brogan brothers. Connor stated, often they’d listen to AC/DC, Stevie Ray Vaughn, Eric Clapton and it cemented that style into their head. The lyrics also seem to hold memorable for listeners. Songs such as “Don’t Exist,” which Ryan has admitted is probably his favorite song by the band, hold lyrics such as “I’m losing all my best friends, we were all hypocrites/ I’m losing all my best friends and I don’t exist.” Connor, who writes all of the lyrics, admits his writing’s tone was negative but that it fit with the time. He would also say though that all of his thoughts and emotions he puts in his writing are real experiences and that although he puts the lyrics out there mainly just to tell stories in his life, he does hope people can relate to it.

“I wrote most of the lyrics in 2008 except for ‘Composing a Commercial Product.’ I don’t know, I didn’t try to write dark lyrics. It’s just how I was at the time,” he said. “I’m kind of sick of it now. Every time I hear about the record, it’s so weird to see that’s how I was back then. I’m not like anymore.

“People grow and change. A lot of the stuff on the album’s so negative and it’s hard to believe I wrote some of that. It’s a recording of how I was at that time and the next one will be different for sure. That’s what we want too. We want every record to be different.”

He went on to say that the band may try writing lyrics together on future records. Although he’s also began working on guitar ideas for the next record, the band is looking to do more touring before they think about another album, putting the timetable at about two years.

Prior to their recent release, the band had not produced an album since October 2007 when their first full-length …And Then the Hurricane came out. The band recorded its first original self-titled EP in 2005. It began with only a few fans a night and has expanded to them playing festivals with upwards of 400 people watching them perform.

And the band personally knows they’re progressing and will continue to. But as long as the fans are there to support them, the size of the crowd isn’t an issue.

“It’s cool when a fan or someone comes up and talks to us about our music and recognizes something we do on stage, because it’s so seldom and rare because our sound isn’t exactly generic and made for the radio,” said Connor. “But when you’re driving eight hours to a show, all it takes for us to make it worth it is the one kid coming up to us and telling us how much our music’s appreciated. If we plays shows like this and no one gives a crap about us, it’s going to be harder, but one kid is all it takes to do it for us.”

Ryan also mentioned that at places like the Jackpot Music Hall, where there were roughly 75 spectators, they may actually sell more merchandise than at their larger shows because of the intimacy of the venue.

The band’s last stop of “Tour Story 4” with Abandon Kansas and The Noise FM was today, August 1. They are looking to tour in the fall, but nothing has been finalized yet. In the meantime, they’ll enjoy listening to mainly music that is usually before the 1980’s era while on the road, with Ryan interested in Aerosmith and Connor interested in Styx and Kansas.