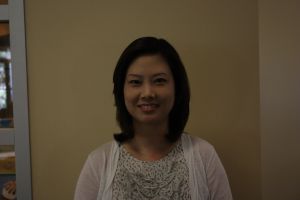 With seasons of change comes the inevitable, “new faces in new places,” at the beginning of the school year.

The mass media department, seeking to transform itself into a place where students get a quality education in cutting edge media techniques, has added faculty this year.

Jaeyoon Park began her education about as far away from Topeka, Kan. as one can imagine. Park grew up in Seoul, South Korea as many youth do, watching television and movies.

Her natural interest grew during the 100-year anniversary of film, which was commemorated in South Korea with numerous film festivals and screenings. After attending the different festivals, Park developed a passion for film.

“I was watching two or three films a day and thinking this could be something I could do,” said Park.

After getting her bachelor’s degree, Park was accepted to Columbia University’s English language program in New York City, a program renowned for its intensive study curriculum. Following Columbia, Park applied to get her master’s degree at New York University but due to the financial realities of a school like NYU, Park went back home and earned her masters in South Korea.After graduation, Park went to work in the television business in South Korea as a writer.

The intense schedule of the industry however didn’t sit well with Park’s personal goals.

“In television you spend so much time not even writing but just doing meetings and I just found there wasn’t enough time for self growth and reading like I enjoy,” said Park

Deciding that she wanted something else from her professional life, Park applied for admission to doctorate programs all over the United States and was accepted at the University of Kansas.

“When I was coming from the airport for the first time to Lawrence, I just thought to myself, ‘what have I got myself into’,” said Park “It was so dark compared to being home in Seoul.”

After working on her dissertation Park began looking for a position at a university and saw that Washburn was hiring. She applied and immediately stood out among the applicants.

“Our department is moving to have more emphasis on digital film techniques and her experience and background was perfect for what we were looking for,” said Kathy Menzie, chair of the mass media department.

Park hopes that her experiences in the professional world, coupled with her extensive studies in film will allow her to find the success she has sought throughout her career.

“I look forward to meeting students and getting to know the Washburn community better,” said Park.