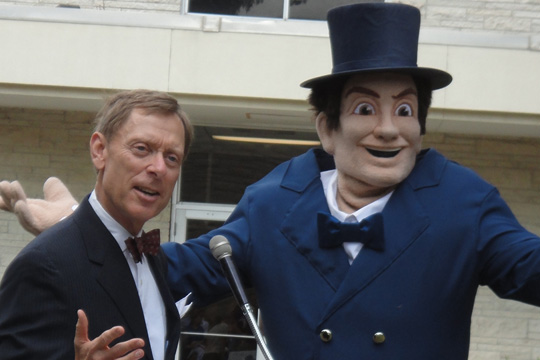 Grand Unveiling Dr. Farley stands by the new Ichabod mascot during the introduction last week. The mascot replaces the prior one, which had been used since the 1980s.

Last Friday, Washburn staff members and students gathered on the north Union lawn to witness the introduction of the new and improved Ichabod mascot.

Following the appearance of Jerry Farley, Washburn President, and the cheers of eager staff members and alumni, the mascot danced and posed his way down the aisle in a grand attempt to show off his classic, yet updated, new look.

Washburn staff members, in particular, were buzzing about the new Ichabod look, waiting in anticipation of the event.

“It was time for a new one,” said Kathy Reser, director of the Memorial Union.

As the crowd continued to look on, Farley spoke of Ichabod Washburn’s commitment to education and the meaning behind the mascot.

The mascot, important to the history of the school, has not been changed since the 1980s. With the previous mascot’s outdated features, the change to the mascot was welcomed. Students of all ages were drawn to the ceremony. Many of the new freshmen seemed unsure of what the previous mascot looked like.

“I had a general idea of what it looked like, but not down to the last detail,” said Alyssa Carver, freshman. “The new one looks good, though.”

The design of the Ichabod, originally created by Washburn Alumnus Bradbury Thompson, was designed for the need of an updated look.

“The other mascot was starting to fall apart, and it was time to change him,” said Amanda Hughes, assistant director of University Relations. “He had more puppet-like features. He had human hands and a plastic face. Now we’ve upped the quality.”

With the improved look of the Ichabod mascot, the question of the mascot’s attitude remains.

“Ichabod hasn’t changed at all,” said Hughes. “Ichabod is going to remain the same. He always will, because that’s our tradition.”