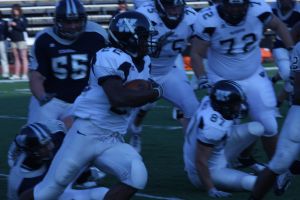 During the 2009 season, the Washburn Ichabods were perhaps the most dynamic team to not make postseason play.

Behind one of the top offenses in the nation, a stellar defense and a surprisingly consistent special teams unit, the Ichabods put together an underwhelming 8-3 record (6-3 in conference) and just barely missed out on the playoffs and bowl games.

The 2010 version of the Ichabods, despite several big losses, could be even better. The defense lost big names such as linebackers Zach Watkins and Michael Krajicek and defensive tackle Ben Bianchino, but recovers defensive back Terry Grimmett and linebacker Michael Wilhoite, who were unavailable most of the year because of injury. The Ichabods also return freshman phenom Pierre Desir, who as a sophomore has already gained Preseason All-American honors, named to the first team by Consensus Draft Services and Lindy’s. Desir led the MIAA with seven interceptions and 13 passes defended and was seventh in the conference in forced fumbles.

The base of the offensive unit returns with last year, although quarterback Dane Simoneau will need to find new targets at wide receiver with the graduation of Drameagon Powers and Brad Cole. Some of his favorite targets will be returning in seniors Lloyd Bias and Joe Hastings, who missed the final nine games of the season with an injury and sophomore Travis Mosby, who is slated as one of the starting receivers. Brody Schuler is slated as the other starting receiver. Jake Iverson, who converted from quarterback after seeing time at both positions last season, will offer his size and athleticism to the mix. At tight end, two more of Simoneau’s favorite targets return in senior Cameron Knox and junior Ryan Mertz.

However, with running backs coach Rob Robinson adding a co-offensive coordinator role to his responsibilities, the talented tailback trio of sophomore Vershon Moore, junior Justin Cooper and senior Terrence Lowe could see more success than ever. Moore, who stepped into the starting role after Cooper was injured, put up an impressive 961 rushing yards with only four starts under his belt. This year, he could potentially put up twice as many yards, although Cooper and Lowe will have plenty of opportunities to get carries. With the Ichabods’ flirtation with the Wildcat offense last season, expect to see more diverse run packages centered around these three backs. Given the opportunity, don’t be surprised to see freshman Darrell Jobe produce some hefty numbers. The Kansas City, Mo., native rushed for 2,531 yards and 29 touchdowns at Winnetonka High School his senior year.

Behind the experienced offensive line of Brian Folkerts, Steve Dieckhaus, Ty Lewis, Ian Vistine and Consensus Draft Service’s second team preseason All-American Bill Boyer, the rush attack should flourish in 2010 and perhaps even give the Ichabods a shot at taking down top ten teams Northwest Missouri State (No. 1 in nation, MIAA opponent) and Abilene Christian (No. 7 in nation, Lonestar Conference), as well as another tough non-conference opponent in Colorado School of Mines.