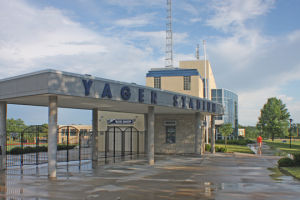 It’s fitting that the 2010 Washburn Ichabods football team spent the past few weeks preparing for the upcoming season in temperatures exceeding 100 degrees. Fitting because the Washburn defense plans to bring the heat on opposing offenses all season.

Despite the loss of All-American linebacker Zach Watkins, the No. 10-ranked Ichabods return eight starters on defense, including two players injured for most of last season. Senior linebacker Michael Wilhoite and sophomore defensive back Terry Grimmett will make their return to the field, along with several sixth-year seniors rejoining the squad. Head coach Craig Schurig believes this experienced group may have what it takes to be better than last year’s impressive squad.

“It’s hard to say,” said Schurig about the defense being improved from 2009. “I think initially going into the season maybe our strength will be more in the back seven, whereas in the past maybe our strength has been the front six with the defensive linemen and inside linebackers. What I’ve seen lately in practice is that the D-line and inside linebackers are really coming around, so I anticipate as the season goes on we’ll be solid everywhere.”

Alongside Grimmett, sophomore Preseason All-American defensive back Pierre Desir looks to improve upon an impressive freshman campaign, which included a conference-high seven interceptions and 13 passes defended. Desir was also seventh in the MIAA in forced fumbles with two.

“We had Fletcher Terrell here, he’s legit,” said Schurig. “He could be playing at the next level, too. Cary Williams was exceptional. Pierre is right in that line. He’s going to end up being bigger than any one of those guys. He has a knack for the football and really has great explosion to the ball, so we’re looking for big things from him.”

“Our secondary in particular has a lot of experience,” said Schurig. “You’ve got guys in that back seven who have played a lot and done very well, and they’re all back. That’s kind of nice, they mesh real well and we can see it in practice.”

On the offensive side of the ball, the Ichabods return eight starters, including four senior wide receivers and a rushing attack Schurig believes could produce two impressive years.

“Both Justin Cooper and Vershon Moore are guys I think could have 1,000 yards,” said Schurig.

Perhaps the largest question on offense is how the loss of offensive coordinator Brian Miller, who resigned after eight seasons to accept a position at the University of Kansas under Turner Gill, will affect the Bods’ play-calling. Schurig said while new offensive coordinator Rob Robinson’s play-calling tendencies may differ slightly from Miller’s, the offense will be quite familiar for players and fans.

“We’re running the same offense,” said Schurig. “The transition’s been really smooth. We had a good spring with it and it’s transitioned into the fall, so far. Our system is pretty much in place.”

While the Ichabods are undoubtedly an experienced team with proven talent, they have a tough road ahead of them. With non-conference opponents Colorado School of Mines and No. 7 Abilene Christian looming on the horizon, and an Oct. 23 homecoming matchup with defending national champion Northwest Missouri State, the currently top-ranked Division II team in the nation, the Ichabods will need a strong effort from offense, defense and special teams if they hope to make this season special—something Schurig believes his team is capable of on a weekly basis.

“Our team is pretty strong,” said Schurig. “We returned a lot of guys, ya know, we graduated a great senior class last year but we still have a lot of really good players. Some of them just haven’t had a lot of game reps yet.”