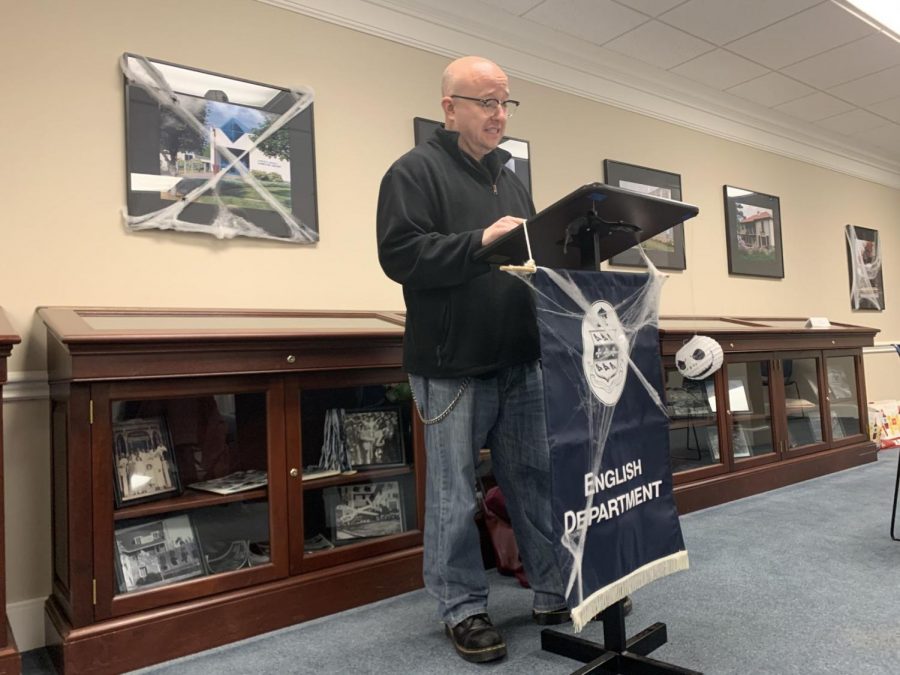 Spreading the news: Professor Andy Farkas speaks about Yellow Brick Road. He encouraged people to look at it in a different light.

The English department hosted a Halloween party Friday, Oct. 25, in the Forum Room of the Bradbury Thompson Alumni Center. The party was short and sweet, but full of entertainment and excitement. There were drinks and snacks like chips and salsa, pumpkin spice cupcakes, and of course a bucket of Halloween candy. The event started off with an animated version of Edgar Allen Poe’s The Tell-Tale Heart. The party was open to all Washburn students and faculty.

“I got a flyer in my English class; I thought it would be interesting to come,” said Weishaar.

The next event of the afternoon were flash talks by some of the professors in the English department. Of course all of these topics were Halloween related, but they made you think more about certain points in a different way, or see some things in a different light. First, Professor Liz Derrington talked about the “Vampires in Pop Culture.” Professor Mary Sheldon discussed the different “Ghosts in Old Literature.” Finally, Professor Dennis Etzel Jr. gave a list of “Pro-Feminist Horror Films to Watch (Again)”; the list includes movies like “Jennifer’s Body,” “All Cheerleaders Die,” “Hush,” and “Us.”

The judges for the costume contests were Laura Murphy in the anthropology department of sociology and anthropology, Geoff Way from the English department, and Chris Jones with philosophy and religious studies. The first costume contest was “Best Literary-themed Costume.” The winner was a student in a Laura Ingalls Wilder costume.

“Both creative writing and literary types tend to really like Halloween, so we all thought it would be fun to celebrate that as a department,” said Professor Kara Kendall-Morwick from the English department.

Round two of the flash talks had three new topics with three new professors. “Welcome to the Asylum” was presented by Professor Muffy Walter; she explained life in a 19th century asylum, what you can do to get put in the asylum, and what “treatments” they would give you. Professor Vanessa Steinroetter spoke about “What’s So Scary about Edgar Allen Poe? A Top 10 List,” from Pit and the Pendulum to Berenice. Then, Professor Andy Farkas finishes the flash talks up with “The Rural Gothic, or the Great Indoorsman Outdoors.” The main movie he spoke about was Yellow Brick Road.

The other costume contest was for the best overall costume. From a fairy to the Purdue Owl; the winner was Michaela Grimes, a junior English major, in her Indigo-Faun.

“I had the costume from the Kansas City Renaissance Festival. It was what I had most accessible to me,” said Grimes.

The English department knows how to party; Poe would’ve been proud of their spooky, sophisticated Halloween party.