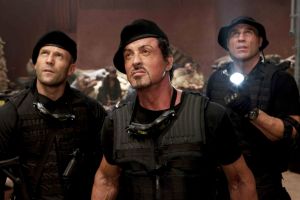 Of all the movies this summer about a rogue team of elite mercenaries (there have been three), “The Expendables” is the only one I bothered to watch.

I was not fooling myself going in. I assumed this was going to be an over-the-top thrill ride with a very thin plot and a lot of good one-liners. As it turns out, it was actually an obscenely gruesome bloodbath with an anorexic storyline and misplaced one-liners with no setup.

Co-writer/director/lead actor Sylvester Stallone clearly decided to rely solely on the big names that signed on for this movie to carry it, because it was distinctly lacking not only in plot and character development, but style and performance as well.

The fight sequences (which, given the number of action stars of which the cast is composed, are proportionately few) are shot without any semblance of artistic or technical ambition. Given the variety and creativity of fight scene cinematography in recent years, the lack of effort in “The Expendables” is clearly due to laziness. Adding insult to injury, the slew of action movie veterans sit back and let Jason Statham and Jet Li handle almost every unarmed combat scene in the film. In fact, outside of the first and last acts, it seems like Stallone, Statham, Li, and Dolph Lundgren are the only guys who seem to have anything to do.

Since the plot could be explained in full detail in under a minute, “The Expendables” fills the vast stretches of time between killing people with the characters whining about the life they lead. Statham’s character, Lee Christmas, is upset that after disappearing for a month to slaughter foreigners without telling his girlfriend, she is seeing someone else. After it is revealed that her new boyfriend hit her, Christmas wins her back by crippling him and his friends then popping their basketball with a knife. Because nothing wins over a woman with an abusive boyfriend like making her watch you savagely beat five men to the brink of death and then turning to her and telling her that this is what you do for a living. But from a film who has three female characters, one of which is onscreen for around a minute, I suppose I should not have expected much.

I know it may seem unfair to rip into “The Expendables” because of its simplicity and violence when it was intended to be action-packed and uncomplicated, but the simple truth is that it has the shortest storyline I can remember seeing and it makes almost no distinction between action and violence. Most conflict in the movie ends with someone blown apart, impaled, or both and the earsplitting volume of the gunfire and explosions is only masked by the laughably overdone scoring that sticks out of the movie like an extra limb. “The Expendables” is a disappointing movie and an outright insult to the action genre.