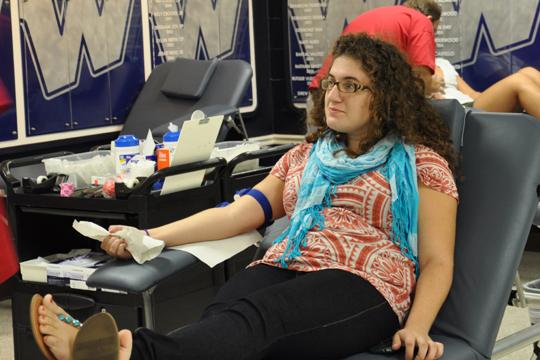 Washburn student Grace Roberts gives blood at the Alpha Delta blood drive. It was their first blood drive, although they hope to do more in the future

Students overcame possible phobias last Tuesday as they helped give back to the community with a blood drive hosted by the Alpha Delta fraternity.

Community Blood Center was on campus from 10 a.m. to 4 p.m. in the lower level of Petro to give students the opportunity to give blood.

Brian Anderson of the Community Blood Center knew this was an important event with students coming back.

“We’re always in need of blood, especially in the summer, it’s slow in summer but picks up in the school year because kids donate blood,” said Anderson.

This is the first time Alpha Delta has put on a blood drive but they hope to make it an annual or semiannual event.

“The Community Blood Center is a good thing and they need different types of blood”, said Ryan Calovich, Alpha Delta president. “Part of Greek life is community service and philanthropy and this is a way for them to help out. To bring it to Washburn will expose it not only to the Greek community but Washburn as a whole.”

The blood drive gave students an opportunity to help support the community and give back.

“It’s cool that I could potentially save two people’s lives. It feels good to give to the community,” said Keith Wagers, an Alpha Delta member who gave blood.

The goal for the blood drive was 54 units according to Anderson. The goal was set by the blood center. Unfortunately the goal was not met as only 45 units of blood were collected.

“I don’t think it was too bad that we didn’t reach our goal with this being our first year,” said Calovich. “However even though the goal was not met, 18 units of blood were collected for the ALYX machine. The ALYX machine “pumps out the blood, takes the red blood cells and then puts the rest back into your body.”

According to Wagers the ALYX machine also processes the blood so that the blood can get to the hospital faster.

In addition to helping out with a good cause, the blood drive was also a source of friendly Greek competition. During the blood drive, the Greek houses were encouraged to give blood. Whichever house had the most members donate would win a cookout provided by the Alpha Delta’s. This year it was a three-way tie between Kappa Sigma, Zeta Tau Alpha and Delta Gamma.

The Fraternity would like to congratulate those chapters and thank everyone who came and supported the blood drive.