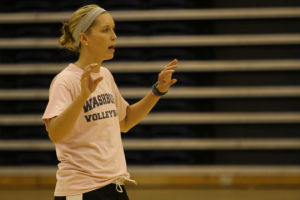 It is said that great players can make great coaches, this can be the case with Dani Schmidt, Lady Blues assistant volleyball coach.

Schmidt, a former three-time all MIAA selection along with two All-American honors on her resume` brings a lot of knowledge for the team. Chris Herron, Lady Blues head coach believes Schmidt’s work ethic has made her a great asset as coach and player.

“All the current players have to do is look up in the rafters and see her number with the All-American labels,” said Herron. “Those banners prove how great of a player and coach she is.”

Schmidt, who has been coaching at Washburn for four  years, enjoys working with the athletes and sharing her knowledge with the team.

“When I played, my work ethic along with my natural ability helped our team excel,” said Schmidt. “The game never felt as a chore and I just loved playing volleyball.”

Herron said when Schmidt was in her junior year in 2004 against Rockhurst University, she recorded 29 kills in a five game match that the Lady Blues finished with a victory.

“Nothing was going to prevent her from losing that match,” Herron said. “It was textbook on how a hitter should player their position.”

Schmidt’s success both on the court and coaching has trickled down to the current Lady Blues. Ashley Shepard, senior hitter has learned a lot through Schmidt on how to prepare before, during and after the game because of Schmidt’s leadership as a coach and player.

“Since Dani was such a great player, she knows from experience how to coach us in a way we can relate,” said Shepard.

Schmidt’s playing style could be described as never being too high or too low. Her even-keel personality helped her success on and off the court and brought her closer to her teammates.

“I wasn’t always vocal, but I tried to lead by example, said Schmidt. “I did make sure I got to know all my teammates on a personal level and let them know I was always there for all of them.”

The Lady Blues travel to San Antonio next weekend for the St. Mary’s University tournament with their first game against Southwestern Oklahoma State this Friday at 12:30 p.m. Schmidt expects the team to excel while taking the tournament and season in stride.

“We preach taking one game at a time and if we can do that this season and in conference, we should have a great shot at accomplishing our goals,” Schmidt said.