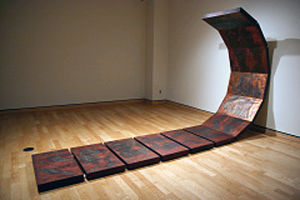 Michael Hager teaches sculpture and printmaking at Washburn University and is also the exhibit preparer at the Mulvane Museum of Art. He also creates art of his own and is the first of many local artists who will be profiled this semester.

“I had artistic talent since I was three years old,” said Hager. “I was told I made my own coloring books because the other coloring books were boring to me.”

Hager was born in 1963. His father worked at Boeing, an airplane manufacturer in Wichita, Kansas, designing 747s. After his father was laid off, with thousands of others at the time, the family moved to Topeka, and his father worked for the state.

“I was the youngest of four kids,” said Hager. “I am really the black sheep. I am the only one with an undergraduate and graduate degree, and the only artist. There were musicians in the family, but no one else does visual arts, that I know of.”

Hager attended French Junior High, which is now known as French Middle School in Topeka. That was when he met art teacher and mentor, Ed Balda.

“He is pretty big in the community and just retired,” said Hager. “For about a two year period he focused on me, and really got me interested in art.”

At that time, Pittsburg was going thru an economic depression, so Hager came back to Topeka and started studying at Washburn.

After two semesters at Washburn, Hager got serious about art.

“It was three in the morning in the printmaking room,” said Hager. “I was standing on a stool, looking down at a print and I realized I would rather finish the print for its own sake than for a grade. At that point, it went from a project for class to a work of art. You usually ease into it, but with me it was an a-ha moment, a Eureka moment.”

After Hager got serious, the art professors at Washburn, now his current and former colleagues, started encouraging him to go to graduate school. Hager attended the University of Iowa and received his masters in fine arts.

“They had, at that time, the number one printmaking program in the country according to ‘USA Today’ and ‘World Report,'” said Hager.

Following graduate school, Hager moved back to Topeka and temporarily worked for nine months at the Kansas State Historical Society. He then worked for the Sabatini Art Gallery at the Topeka and Shawnee County Public Library. At this same time, he began working for Washburn as an adjunct professor.

“The library needed me during the day,” said Hager. “That is why sculpture is taught on Monday and Wednesday nights.”

After leaving the library, Hager began working at the Mulvane during the day. He now works days at the Mulvane, and teaches sculpture as an adjunct professor on Monday and Wednesday nights in the art building.

Hager spends time creating his own works of art and has a Website where his pieces can be viewed. His Website is www.michaelhagerstudios.com.

“My work is continuous,” said Hager. “I don’t paint. I don’t draw. I don’t do stuff that is just sitting there and doing it. I do physical stuff. I have to be walking around.”

Hager also explained that he likes to be aware of his surroundings while working.

“To me, getting in the zone, something all artists try to do, is distractive,” said Hager. “I like to know what is going on around me. It influences my art.”

Hager feels that his background in technical drafting has a huge influence on his artwork, and also admits that the artist mindset did not hit him until he was in graduate school.

“When I was in undergrad, I did shallow, geometric stuff based on past movements that I liked,” said Hager. “Being an artist is not about making art. It’s about the mindset and thinking involved. The whole idea of seeing something and knowing it’s going to be something else is difficult for me.”

Hager enjoys art history for the philosophy involved. Hager says his favorite artists and pieces “shift,” and he is often influenced by what he is reading. He says that Richard Serra and Arthur Stackhouse influence his work and are constant standards.

“When people ask me why I do art, I tell them I can’t not do art,” said Hager. “That’s like asking me why I breathe.”