No. 15 Washburn continues skid against No. 11 Missouri Western 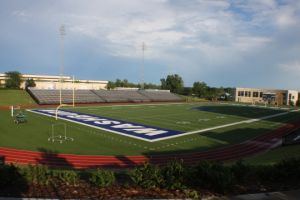 Washburn went into Saturday night’s game looking to correct mistakes from its disappointing loss last week to Abilene Christian. Unfortunately in the first half, the demons of the season thus far, came back to haunt them.

Washburn struck with what was hoped to be an early big play from Ichabod Ronnell Garner, punt returner. Garner took advantage of a bad punt by Missouri Western State University and ran it back for a touchdown.

“We came out early and I thought, set the tone for the game with a punt return early and then things kinda got away from us,” said Craig Schurig, Washburn head coach.

The big plays in the first half, combined with 10 penalties for 70 yards on the Ichabods, allowed the momentum to swing in the Griffon’s favor. Washburn struggled the rest of the first half to get anything going.

Despite a sloppy first half, Washburn, down 21 points at the half, still felt they were right in the game.

“We had a plan and we did what we could to keep ourselves composed,” said Joe Hastings, senior wide receiver.

The second half began with Washburn receiving the ball and moving down the field to put a field goal on the scoreboard.

Washburn’s defense, having made adjustments at half time, came out and made decisive plays throughout the third quarter, recovering two fumbles, one returned for a touchdown and the other setting up an offensive score to bring the Missouri Western lead to just three at 28-25.

With just over five minutes left in the third quarter, the game was stopped due to lightning in the area for approximately 84 minutes. The time gave Missouri Western, who were reeling from the turnovers, a chance to regroup themselves and settle back down.

Washburn, momentum slowed by mother nature, attempted to keep things rolling in the fourth quarter. Managing to put together a small lead with five minutes left to go in the game, Missouri Western responded with a clock-chewing drive that ended with a touchdown to take the lead back.

Washburn’s last attempt to get back the lead ended with roughly 39 seconds left in the game with Dane Simoneau, quarterback, being intercepted.

The Ichabods now set out on a two-game road trip, facing Central Missouri State University this Saturday at 1:30 p.m. in Warrensburg, Mo., and Fort Hays State University the following Saturday at 7 p.m. Washburn will return home Oct. 9 to take on the University of Nebraska-Omaha at 1 p.m. in the Hall of Fame Game. Inductees will be former basketball star, Jordan Canfield; former three-sport athlete, John Waltz and former Topeka Capital-Journal sportswriter, Pete Goering.