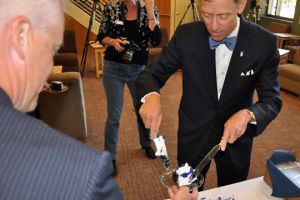 Washburn University received good news Friday. Despite budget cuts and enrollment numbers dropping at many state universities, enrollment for the Fall 2010 semester is up 8.7 percent from where it was a year ago.

Friday, Washburn hosted a press conference in the Living Learning Center lobby. Serving cake for celebration, the main focus was to discuss the achievements the university accomplished this fall. Washburn President Jerry Farley’s main points included the team effort it took to accomplish such a goal of increased enrollment.

“It really does take an entire office and university to create a positive outcome,” said Farley.

The university completely filled their residence halls for the semester and so far, they have remained that way, meaning the international students who came to the university late may have been left without a room. However, Farley mentioned that families around the community have been able to take in those extra students.

But with such an increase comes a responsibility to retain the new students. Farley talked about a program that should be implemented soon that he thinks will help keep students at Washburn.

“We’ve been working on this for several years and we will implement it by next fall: a first year experience program,” said Farley. “It will enhance, from what we [Washburn] think, from experiences other people have had, retention.”

Classes are filling up quickly. While the university has increased enrollment, the number of classes is staying constant, to make sure that seats are filling up before new sections are opened.

The university has also seen an increase in athletes on campus and the law school also took more students than usual. The law school had roughly 1,100 applicants and 144 were accepted, according to Farley. Usually, the university has roughly 125 new law students. Furthermore, the incoming law school class is the highest academically rated class in the school’s history.

But while the numbers are the highest they’ve been since 2005 for university enrollment, Farley knows that with the size of Washburn, there has to be an eventual cutoff point.

“What we will do is at some point say ‘this is all the enrollment we’ll take,’ because we don’t want to lose this intimacy for the size of campus that we are,” said Farley.

Farley went on to say that the university would eventually have to stop at nearly 8,000 students, unless the university made accommodations that included earlier morning classes and a schedule that had classes virtually all day and evening.

However, the university does plan on doing some renovating and possibly expanding in the future. But no big changes are going to take place just yet.

“Other than a law school building, we don’t have any plans for major new facilities on campus,” said Farley. “We’re going to recapture some space in Henderson and we’re going to expand a little bit the space in Morgan Hall to kind of create an interest in the university and a one-stop shop for students that come in.

Farley though allowed thought for future growth, if it’s needed.

“But if we go to 8,000 students and there’s still a demand, such as the city of Topeka starts to grow and there’s a demand, we’ll have to add facilities because we simply don’t have enough classroom space. But that’ll be in five to ten, probably ten to 15 years out, to occur, it appears to me.”

For now though, even if enrollment rates drop off a bit at the end of the semester, Farley is satisfied with where Washburn is right now.

The fall enrollment numbers are public information and should eventually be made available, according to Farley.