Dinner with the Farleys 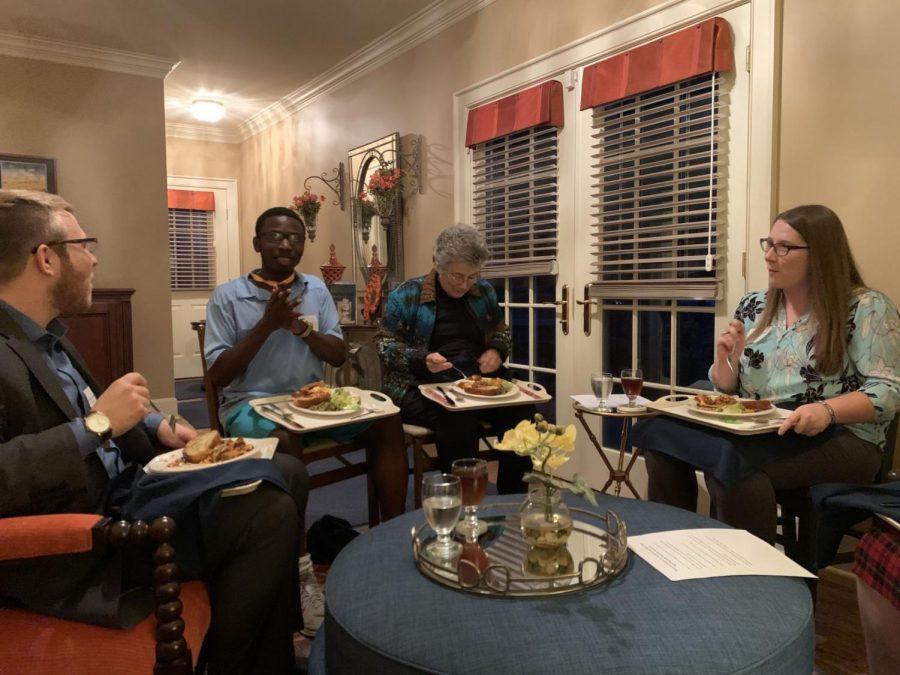 Dine and discuss: One of the three groups discusses questions that Susan Farley created. They enjoyed their meal while enjoying good conversation with their peers.

President Jerry Farley and his wife, Susan Farley, opened their home to select students to enjoy a group discussion with Sean Bird over a meal.

Eighteen students, freshmen through seniors at Washburn University, and Associate Dean of University Libraries & the Center for Student Success Sean Bird were invited as a result of a random drawing. The lucky ones got to enjoy a dinner and some open discussion in the company of the Washburn University president and his wife on Wednesday, Oct. 23 at 6 p.m. “Dinner with the Farleys” is an event that happens three to four times a semester, where the Farleys invite students and one faculty member.

“I thought it would be an interesting event to go to,” said Sabrina Flanigan, a freshman who double majors in photography and business.

President Farley wanted his guests, who had a wide variety of backgrounds and majors, to get to know each other and feel at home. Every dinner has had a different discussion topic with a different faculty member. Bird suggested a discussion about social media and democracy. So, they focused on freedom, equality, justice and representation of an Athenian democracy.

After everyone got their food, the students split into three groups, led by Dr. Farley, Susan Farley, and Bird. The leaders asked many questions to spark their interest and challenge their intellect. They focused on how social media and democracy is connected, and compared how they can be assets or liabilities to one another. The rule of free speech in a democracy was pointed out. Then they were asked how social media compares to television, print media, oration, and speech expression in centuries past.

The Farleys and their guests got personal with some of their answers because they passionately connected and related to each question. Andrew Foreman, a senior accounting and entrepreneurship major, has been to the Farley’s a couple times for this event.

“There is always a good discussion,” said Foreman. “You get to listen to others’ ideas and broaden your horizons.”

Sean Bird said he plans on continuing to take part in the events.

“Well, it’s because Susan asked me, also because the library has been home of the iREAD lecture for the last several years.” said Bird.

President Farley explained why he has hosted this event ever since he became the President of Washburn University 23 years ago.

Students can sign up for Dinner with the Farley’s at the BOWTIE event. On the night of the event, the participating faculty member can recommend names chosen from a variety of places, such as outstanding students referenced in the Washburn Review, and honor roll students. Dinner with the Farleys was an event unlike any other, where food was shared and new friends were made.