Not easy being green 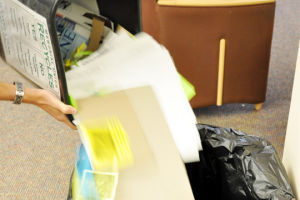 When the trend of recycling and preserving the Earth started, Washburn University wanted to improve on its recycling efforts.

“The recycling program has come a long way since it was started around 2000,” said Mike Jauken, facilities services chief of grounds keeping. “Washburn University has several recycling bins including a cardboard, paper and bottle bin all of which are located behind Henderson Learning Center. When the soda machines on campus had the aluminum cans the campus recycled those; however, since the machines now carry plastic the campus has switched to recycling bottles instead,”

While the amount of trash varies throughout the year, events like football or basketball games typically generate more garbage.

Jauken says that although there is no way to know for sure, approximately half of the garage could probably be recycled if proper disposal measures were taken.

“Students here on campus have containers in the hallways where you can put bottles, the classrooms have a place to recycle paper,” said Jauken.

Often, the problem that prohibits the reduction of waste is not the students or faculty’s unwillingness to recycle, but comes from well-meaning recyclers.

“Let’s say people are putting paper [into a recycling bin]. Then somebody will come along and throw a couple pop cans and some candy bar wrappers in there [also], and etc. that doesn’t belong in there and the bin becomes, in a sense, contaminated,” said Jenken.