[me] & goji break breakfast out of the box 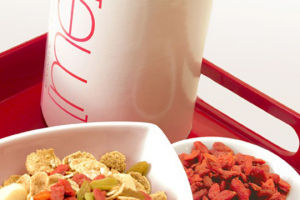 Old pizza, ramen and stale cereal are just a few of the things college students usually end up eating for breakfast, but the creators of [me]&goji offer a healthy alternative.

Alexander Renzi and Adam Sirois discovered early on that school cafeterias and trips to the grocery store weren’t going to cut it if they wanted to perform their best during the day. They both played soccer for Northwestern University and needed a lot of energy to do it.

“At the beginning of the season we had practice at 7 a.m.,” said Renzi. “At the cafeteria they had your general captain crunch or waffles, but nothing very healthy.”

They would hold on to that want of better breakfast foods until post-graduation. After school they parted ways and worked corporate jobs at opposite ends of the country, but they eventually came to the realization that they wanted to work together.

“We had always wanted to own our own company,” said Renzi. “We sat down and brainstormed for six months and decided.”

Breakfast had always been an issue for them and cereal soon became their medium of business.

“There should be healthier and tastier alternatives to breakfast,” said Renzi. “We picked cereal because it’s one of those truly American foods that people are passionate about, but hasn’t really changed.”

Renzi and Sirois were going to add innovation and class to cereal.

“We wanted to make cereal a premium product,” Renzi said.

Well, [me]&goji could be that “something healthy” any day of the week. Their website allows you to choose your cereal base out of numerous all-natural, organic choices. Whether you like flakes, oats, or wheat; it’s all there. Then you add dried fruit or nuts or even something chocolate covered. With 60+ ingredients there are literally thousands of combinations.

“Our cereal comes in a Cereal Capsule,” said Renzi. “It’s sort of like a giant Pringles can. This air tight tube helps keep your creation fresh for as long as it takes you to munch it down. Each order contains 600g or over 21 oz. which is about twice the amount of an average size box of cereal. ”

In addition to caring greatly for the consumer, [me]&goji also shows a high level of concern for the environment. Those cereal capsules are 100% recyclable and the boxes they use to ship them are 100 percent made from PCW or post-consumer waste. As their website states, part of their “supereal” vision includes “taking care of our planet is about doing the right thing, not about scientific data or celebrity pleas.”

Instead of stumbling into class on an empty stomach or settling for the closest thing to the door in the morning, try eating something healthy.

Cereal doesn’t have to a dry combination of bran and wheat; it can certainly be sweet too. One of their websites favorite mixes is called “adam’s apple” and includes apples, cinnamon, cranberry, goji, golden raisins and pumpkin seeds.

The explanation of the company’s title really brings it all together. “We wanted more of a lifestyle brand to highlight customization,” Renzi said. “The ‘me’ in brackets is to allow you to insert your own story and goji fruit is probably one of the most nutritious foods out there.” For instance, this writer’s cereal might represent [writing an entertaining article for the Washburn Review]&goji. Whatever the individual’s taste is, [me]&goji probably has something to satisfy and chances are it’s easier and healthier.

“It’s very easy to carry around,” said Renzi. “You can express yourself by not only creating your own mix but naming it whatever you want.”