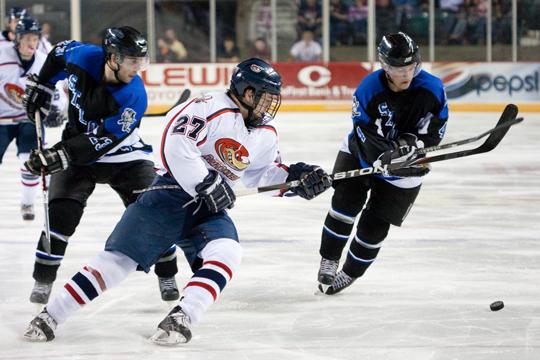 A rivalry renews this weekend when the Topeka RoadRunners play the St. Louis Bandits. The teams are two of the top franchises in the league and play their first series out of four this season.

The Topeka RoadRunners have to feel pretty confident after finishing the North American Hockey League Showcase undefeated, but they can’t get too comfortable just yet.

After winning all four games in the opening season showcase, Topeka(4-0-0) will now face the St. Louis Bandits(5-1-0) tonight at 7:05 p.m. and tomorrow at 5:05 p.m. This will be the first games between the teams this season. The Bandits handed the ‘Runners their final loss of the season last year when they defeated Topeka 5-0 to advance to the Robertson Cup.

RoadRunners head coach Scott Langer knows this a huge test early in the season for the team. The Bandits are notoriously strong on their home ice, which is larger than the regulation size rink used in most arenas in the NAHL.

“Against (St. Louis), you just can’t take a shift off,” said Langer. “You got to have timely scoring and you got to play solid defense. They’re going to throw solid defense at you and you have to capitalize on your opportunities when you get them because you’re not going to get too many of them.”

The RoadRunners have capitalized on their opportunities so far this season, scoring 15 goals in the first four games. Returner Michael Hill leads Topeka with nine points on the season currently and newcomer Justin Hussar leads the team in goals with four and is second in points with six.Finnish goaltender Rasmus Tirronen has been strong in goal in two starts with only one goal allowed and 43 shots stopped. Eric Rohrkemper, who returns from last season, has allowed five goals on 34 shots.

After playing four exhibition games and now the showcase, Topeka has a few games under their belt. Langer has been able to see the improvements and feels that it’s gone the way he’d expected it to.

“Sure enough, it played out the way we planned it,” said Langer. “What we did with the exhibitions certainly was a positive heading into the showcase. We really wanted a good performance for those guys in the showcase. I’m pleasantly surprised with our guys’ IQ at this point and how quick they’re picking things up. If they stick to the game plan like they have been, they should only get better.”

Topeka and St. Louis are no longer in the same division for the upcoming season. After expansion, the teams will play in the South and North Divisions respectively, but will still play eight times this season. With Topeka’s hosting of the Robertson Cup this season, they automatically are bid into the round-robin tournament.

And even for the new players, Langer wants his players to make sure they step up their game for this season.