Search on for new Ichabod mascot 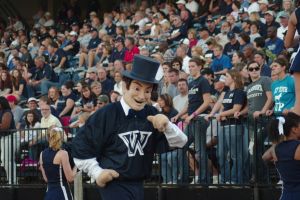 This year, Washburn University has a new costume for its mascot and is looking for a student to give it some life.

While it was thought that a new, clean costume would be a good recruitment tool, turnout has been slower than in previous years, with only six students auditioning.

“There’s a new look to him,” said Amanda Hughes, assistant director of university relations.  “He’s not as smelly as he was before, so that’s a huge appeal if you’re a performer.  The other face was kind of falling apart and everything.”

The Ichabod costume has gone through several modifications in order to appeal to a larger crowd of students and Washburn fans.

Even with superficial changes on the outside of the Ichabod, it takes the same effort underneath the contemporary attire to make someone standout at auditions, both in physical ability and in quality of character.

“It takes a certain special, unique type of personality who wants to be a mascot,” says Dena Anson, director of university relations.  “It’s not for everybody, but the people who want to do it love it.”

Another important factor in the equation of making an Ichabod is entertainment value from the performer and the reaction from the crowd. The Ichabod mascot is expected to entertain the crowds, greet fans, participate in events outside of games and represent Washburn in a positive light.

“Definitely knowing how to work a crowd and, obviously, we do give some training when it comes to that, but wanting to get out and interact with the crowd,” said Hughes.  “Washburn excitement, to be proud of Washburn and to want to be the mascot is a huge honor to do that.”

Not just amusement at Washburn sporting events, the Ichabod is a symbol for all to recognize.

“Even off campus, the Ichabod serves as a representative of Washburn,” said Anson. “So it [the mascot] needs somebody who understands some of those obligations.”