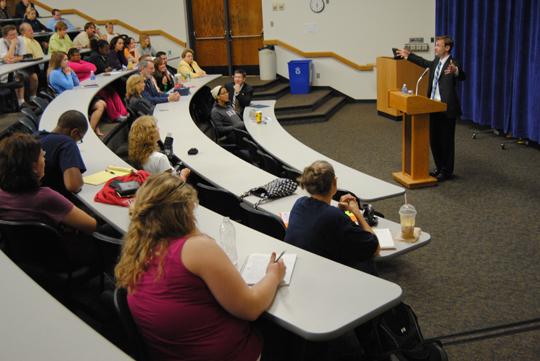 Washburn Student Government Association, with the Honorable Christel Marquardt, a Washburn Board of Regents member, pushed to make Constitution Day a huge success.

Friday, Sept. 17., the morning flew by in Henderson 100 as actual hearings were heard by area judges. At noon, Mark Bambauer, a professor at Brooklyn Law School, spoke about the many Constitutional issues surrounding possible censorship of the Internet. He said that even in America, the land of the free, it was possible for censorship to pervade everyday activities, such as a bus in Utah that provides censored Internet to its patrons.

The presentation turned international as Bambauer addressed countries that have begun censorship activities that he fears America could follow. They included a recent attempt by the Australian government to provide censored Internet to citizens, and while it was not very successful, Bambauer expressed concern that America may eventually pass tax legislation that encourages Internet providers to set censored service as the default in their packages.

The lecture was well-attended, in part because of WSGA-sponsored drawing for a free iPad, where one had to be in attendance to win. Students qualified by filling out a quiz on the Constitution and filling out tickets earlier that week.