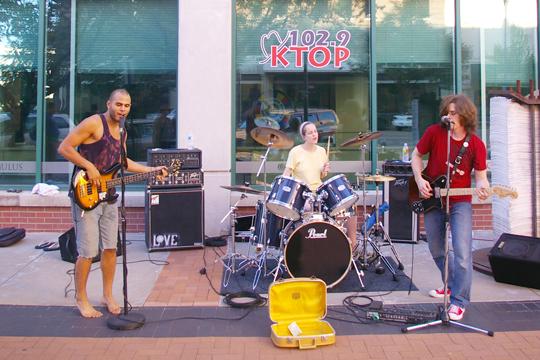 The downtown area of Topeka has entered a period of renaissance. The evidence of which can be seen on Thursday nights thanks to the creation of Top City Thursdays.

After various Topeka organizations decided that a prosperous and happening downtown was a must to attract new business, Downtown Topeka Inc. put plans into action. “We were getting a lot of messages on our Facebook page as well as on the phone,” said Laurel Leamon, Downtown Topeka Inc. Director of Events. “People had this idea about downtown that there was never anything open.”

When the planning originally began, Leamon recognized that a few businesses were already staying open a little bit later on Thursdays.

“We thought, well, why don’t we try it for three months to see if the downtown businesses would like to do a big marketing push to try and get people to see that downtown is open,” said Leamon . “We asked the all the businesses if they’d like to stay open on Thursdays, and they all did.”

“They said, ‘we know some people that might be willing to come out and play,'”said Leamon. “They called the first people and now people call us.”

Now, each Thursday night Kansas Avenue is host to a wide variety of local entertainment, from belly dancers to classic rock ‘n’ roll inspired bands like Chris Aytes and the Good Ambition. Excited about their first night performing at Top City Thursdays, the band was relaxed and ready to play, despite that they had yet to find a reliable power source for their equipment.

“We were down here last week listening to another guy,” said Renelle Aytes, drummer and wife of Chris Aytes. “We ran into the coordinator and she checked us out on MySpace and she liked us and told us to come over here tonight.”

“It’s kinda hard to nail us down to any specific genre,” said Josh Hartranft, bass player in the band. Whatever the genre, if you’re looking for some roaring electric guitar and original lyrics, then look for Chris Aytes and the Good Ambition downtown.

Although up and coming musicians may be excited about the increased foot and vehicular traffic generated by Top City Thursdays, they are not the only ones. Local businesses have reported a definite increase in sales to the event coordinators and are excited about what the event is doing for the community.

“I think it’s a really good thing,” said Diana Harvey of Hazel Hill Chocolate. “A lot more people are coming down just to see what’s downtown and it gives them a day to do it and it gives them a reason to come downtown. It’s helped a lot of the businesses.”

From 5 to 8 p.m. on Thursday nights, the downtown area is alive with culture, local flavor and custom shops. Originally, Top City Thursdays was supposed to last until the end of September but the event is doing so well that they are extending its exhibition into the fall. Next year, they plan to have the dates coincide with the Topeka Farmer’s Market.

“We have plans to make it bigger and better and more entertaining,”said Leamon.

Downtown Topeka Inc. also plans to focus certain Top City nights on local charities such as the United Way. There is a little bit of everything in the downtown area of Topeka which creates a low competition, welcome type of atmosphere worth experiencing.

“The businesses really want each other to do well,” Leamon said. “It’s really more like a neighborhood.