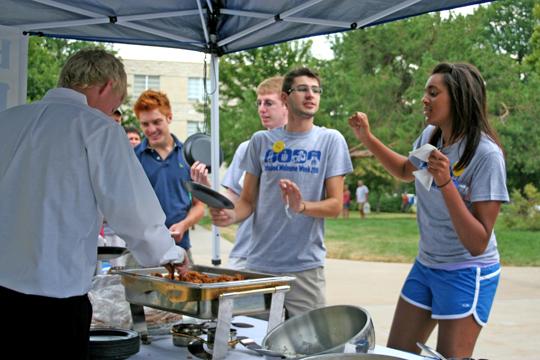 Breaking it down Nick Brown and Joni Wiley get their dance on to the Magnetics at Scorch on the Porch. The Union served dinner and free cupcakes to those in attendance.

The Union lawn was filled with the sound of students and staff, along with the raging chords and vocals of “The Magnetics” as Scorch on the Porch began August 20.

The band kicked off its set with a cover of “Shut Up and Let Me Go,” famously performed by the Ting-Tings. The band members mixed and matched their own style into the song with a riff from “Party in the USA” by Miley Cyrus. They also dove into songs by: Tom Petty, Sublime, Gorillaz and others as well during their performance.

Some students could hear the festivities going on from inside nearby buildings.

“I was in the cafeteria having lunch with friends and heard the band playing outside,” said Tricia Cares, freshman. “We had to go outside and see what was going on.”

The newness of the event brought a bit of excitement for some students as well.

“There were a lot of people out there,” said Carlie Morris, freshman “I didn’t even know where to start.”

Along with the music, festivities included free cupcakes in honor of Ichabod Washburn’s 212th birthday. There were also sidewalk sales from the Washburn Bookstore, as well as a seven-hole Frisbee golf course.

Scorch on the Porch has been a tradition for many years. With each outing come a different lunch menu and atmosphere, since many of the events have themes. Jerry Farley, President is a big fan of the Scorch on the Porch series, because he believes that it is a good way for students to meet other students.

The Magnetics looked for encouragement as they rolled through their set, to which they received applause.

“Two thumbs up?” said one of the members.

The Magnetics will continue their performances in the Manhattan and Kansas City area.