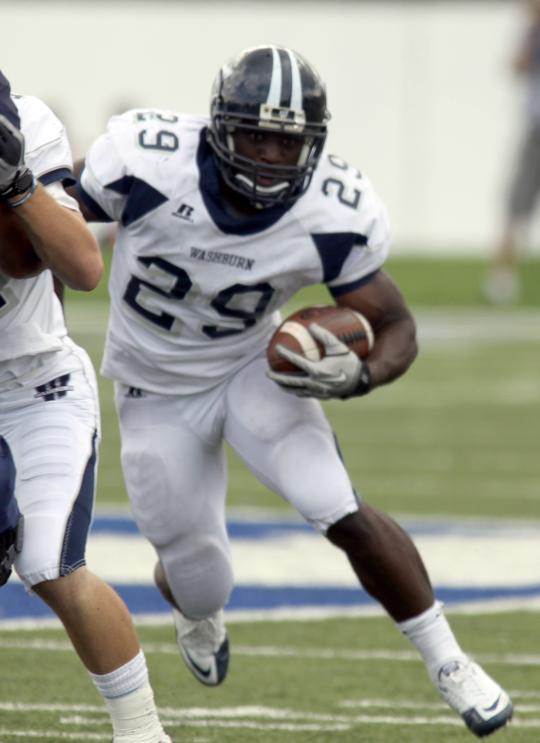 Carrying the load Vershon Moore runs the ball against Colorado School of Mines. He ran 218 yards on 24 carries and one touchdown in the Ichabods win.

After a narrow 34-29 road victory last Saturday in Golden, Colo., the Ichabods (1-0) return to the friendly confines of Yager Stadium this week to prepare for their first top ten opponent of the season No. 6 Abilene Christian University (0-0).

Head coach Craig Schurig looks to correct several technical difficulties in practice this week after the Washburn offense gave up five turnovers to Colorado School of Mines. He also has to correct a defensive secondary, one he touted prior to the season as being the strength of the defense, after it gave up four passing touchdowns Saturday afternoon.

“We made enough mistakes to last the season, in the first half in particular, but it was nice that we overcame them,” said Schurig. “You hope you improve a lot after the first game and I think our kids are in the frame of mind that they’ll really look at it and improve.”

After watching game tape Sunday, Schurig said the majority of the mistakes were easily correctable and should be taken care of in time for Saturday’s 6 p.m. home-opener against ACU.

“We can’t turn the ball over five times against a team like them,” said Schurig. “It was mostly discipline issues turnovers, penalties and coverage on our kicking game – all areas we think we can make an immediate improvement on and that should help us. You can’t do that against super talented teams.”

While the errors made against the Orediggers were certainly glaring, the Ichabods had several bright spots on the game film, as well. Washburn’s rushing attack amassed 311 yards and two touchdowns, which included 24 carries for 218 yards and a touchdown from sophomore running back Vershon Moore, and junior running back Justin Cooper chipped in 16 rushes for 81 yards and a fourth quarter touchdown to seal the win for Washburn. Senior running back Terrence Lowe saw limited carries, but is expected to see his role increase next week.

“It’s good to have two other good running backs,” said Moore. “It’s harder for the defense to stop all three of us, so I’d say it’s a good little thing we’ve got going on sharing the ball.”

Junior quarterback Dane Simoneau, despite throwing two interceptions, was fairly accurate against the Orediggers. He went 21-for-28 for 300 yards and two touchdowns, and after watching the game film Sunday, Schurig attributed the interceptions to the Oredigger’s defense rather than his quarterback’s abilities.

“The interceptions, they were throws where he was on target with the throw, but it was good plays on their defense,” said Schurig. “Watching the film, it wasn’t like it was a bad judgment or forcing the ball, it was just nice defensive plays.”

Simoneau connected with sixth-year senior receiver Joe Hastings 13 times Saturday, which ties a school record set by Ron Hamilton in 1980 against Wayne State. Hastings also became the first player since Sam Sissom in 2006 to go over 200 receiving yards in a game, just barely eclipsing the mark with 201 yards.

“He’s kind of the go-to guy right now,” said Simoneau. “We worked in the summer a lot and he’s my roommate so we’d come off the field quite a bit. He does a nice job of getting open and he runs crisp, smooth routes and I kinda know where he’s going to be so we’ve got that connection.”

On the defensive side of the ball, there were things for Schurig to smile about. The Ichabods forced five turnovers of their own and tallied six sacks on Oredigger quarterback Clay Garcia, including a fourth quarter sack by sophomore linebacker Jahmil Taylor, which resulted in a fumble recovery by Marty Pfannenstiel, junior linebacker, and sealed the final score.

“I think we got good pressure on the quarterback here and there,” said Michael Wilhoite, senior linebacker. “We rallied to the ball, players stayed positive, we picked each other up throughout the game. I mean, we made little mistakes here and there but players were always confident, coming back to the bench, helping each other out, correcting the mistakes and going out and continuing to play football.”

Wilhoite, who had two sacks and a forced fumble, made his return to Washburn football after missing the 2009 season with a stress fracture in his right leg. Though he typically plays linebacker, Wilhoite made appearances at the defensive end position against Colorado School of Mines.

“Work ethic, man,” said Wilhoite. “I’ve worked real hard over the summer. I think it’s a lot of work ethic and a lot of my teammates and coaches putting me in the right spots. Coach Brown came up with the idea to put me at that D-end position and it’s helped a lot. When I play that D-end, it helps when I have my outside linebackers or defensive tackles taking up those other offensive linemen and freeing me up.”

Though the defense had several setbacks against the Orediggers, Wilhoite’s emotion toward playing Abilene Christian is anything but worried.

“I’m excited as heck,” said Wilhoite. “It’s gonna be awesome. It’s not often you get to start off the season with one of the best teams in the country. In the past couple of years we’ve played Pitt State, Northwest and Omaha at the end of the season, who are our better competition. This year, we get to go right into it. We get to put everything we have into this week and then the next week grab a bye and get the rest and recover. We’re excited to see what we’re really made of.”