Six String Down: Celebrating the music of Stevie Ray Vaughan 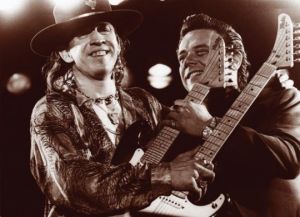 As guitarist Stevie Ray Vaughan walked off the stage from a sold-out concert at Alpine Valley Music Theatre in East Troy, Mich., on  Aug. 27, 1990, there was no doubt that he was the greatest guitar player alive. Twenty minutes later he was dead.

Despite playing the blues, Stevie Ray Vaughan’s music had a way of making you feel more alive than ever. There was a spirit to his music and his playing that is just indescribable. More than just playing the guitar, he felt it with his soul.

To me, Stevie Ray Vaughan’s music has been about nothing less than pure, raw emotion. I was first introduced to his work about 10 years ago by a former editor at the Hutchinson News, where I was working as a designer at the time. His work is what you feel in your soul. It’s called the “blues” for a reason. Watch him play, and you can feel it too. There is sadness and the blues, but there’s also hope and redemption. And that’s the best sound of all.

Based on an electric performance at the 1982 Montreux Jazz Festival in Switzerland, singer/songwriter Jackson Browne offered Stevie and his band Double Trouble a few days worth of time at his recording studio. That demo recording was impressive enough to become Stevie Ray Vaughan and Double Trouble’s debut album, 1983’s “Texas Flood.” The album’s titular track, as well as the classic “Pride and Joy” almost immediately took the blues world by storm.

Winning numerous early awards, including numerous local Austin, Texas, music scene awards and Best Blues Recording Grammy nominations in 1983 and 1984, Stevie Ray Vaughan stood out in an otherwise dark time in Rock and Roll. Winning the respect and admiration of peers such as Jeff Beck, Eric Clapton and Buddy Guy, Stevie Ray Vaughan was able to breathe new life and electricity into the blues.

But more than just a story of the blues, Stevie was a study in redemption. After battling heavy substance abuse issues, he came out on the other side clean and sober and ready for action. Rather than hiding from his addiction issues, Stevie dealt with them head on with 1989’s amazing album, “In Step,” resulting in new attention to not only his guitar prowess, but also his songwriting abilities. The song “Crossfire” even reached number one on the U.S. Rock charts.

With the song “Tightrope,” Stevie took the hard costs of addiction and stared them down cold. And it became one of his greatest songs, reaching #14 on the rock charts.

But just when he seemed to be reaching his peak, tragedy struck. In an eerie repeat of  “the day the music died,” Stevie Ray Vaughan was killed in a helicopter crash en route to Chicago. Following an encore jam at Alpine Valley which included the likes of Eric Clapton, Buddy Guy, Robert Cray and Stevie’s older brother Jimmie, Stevie Ray Vaughan walked off the stage for the last time, a legend in his own time.

Five years after Stevie’s death, his friends and peers performed a musical tribute to the blues icon. Filmed and record for the album “A Tribute to Stevie Ray Vaughan,” the highlight of the show was an all-star jam on the song “Six String Down,” which was written by Stevie’s brother Jimmie, a guitarist in his own right. Featuring guitar heavyweights such as BB King, Eric Clapton, Bonnie Raitt, Buddy Guy, Dr. John and Stevie’s band Double Trouble, the song mourns not only the loss of a brother, but also honors the blues heroes that had come and gone before.

By the time the final note rings silent, you feel that a soul has been cleansed. And that’s beauty in its purest form.

In the middle of the night

On the heaven-bound flight

Got a pick, a strap, guitar on his back