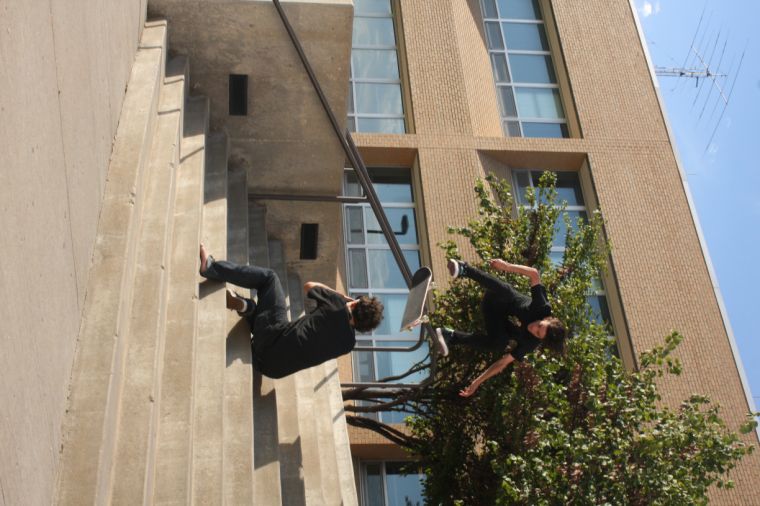 Catching some air Addie Toelkes, a skateboarder from Lawrence, attempts to land a switch heelflip as Tyler Noah, a videographer from Lawrence, captures the trick. Toelkes is Sponsored by White Chocolate skate shop in Lawrence. Photo by Mike Goehring, Washburn Review.

On Sunday Sept. 5, a few Lawrence skateboarders met up with some videographers to head out to the streets to watch skateboarder JP Redman.

Redman was going to attempt to Krooked Grind a rail in the heart of the city.  When the crew arrived at the skate spot, Redmon

started his warm up doing a few ride ups to get the feel for the trick.

His first attempt at the rail ended with him sliding and jumping out half way down the rail. During his attempts at one point, Redmon slid down the whole rail, popped off the end, but couldn’t quite stay on his board. For his next attempt, he added a wax to the rail to help him move smoothly over the rail. The following attempt was not as successful for Redmon as he approached the rail he bailed early, wrapping his body between his rib cage and hip like a jack knife.  After 20 seconds of stunned silence, everyone moved closer to see if he was okay.

“I was seeing stars for like a minute and my side feels weird,” said Redmon.

He attempted a few more rides toward the rail but he was done for the day. He said he was disappointed he could not complete the trick because of everyone who came to watch.

“I really want to get this trick it’s so hard to get everyone together like this,” said Redmon.

Redmon plans to return and try again. Shortly after, two other skateboarders in the crowd headed to a ten-step stairway located near by.

Addison Toelkes and Josiah Tripoli were both attempting tricks down the stair set. They alternated attempts back and forth with Toelkes attempting a switch heelflip and Tripoli attempting a varial heelflip. Toelkes rolled up to the stair set with considerable speed, popping the board up with his back foot and flipping it with the heel of his front foot, sending the board sailing over the stairs. He landed soundly and rode away clean. Tripoli was still trying to stick the varial heelflip, getting so close to landing it but he continued to shoot out. Tripoli finally completed it-threw out a big varial heelflip catching it high over the stairs and landing with ease.

Overall, it was a productive day of skateboarding and gathering footage. The skateboarders continue to skate in the Lawrence skate park until the next time they take their skills to the streets.