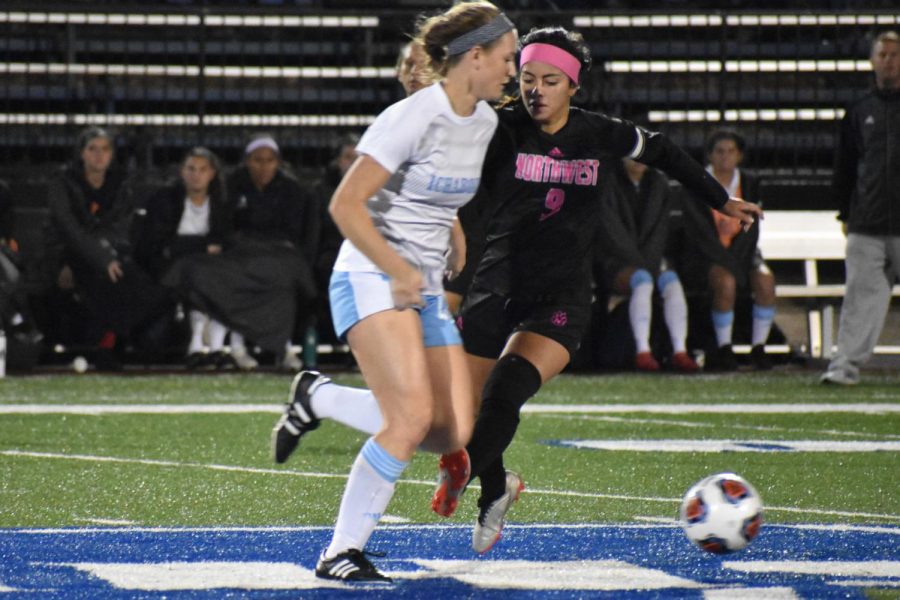 Highway robbery: Freshman Lauren Dietrick robs a Northwest player of the ball and makes her way down the field. In high school, Dietrick tallied 59 goals in her three years playing soccer.

Washburn’s Ichabods met the Bearcats of Northwest Missouri Friday night Oct 4 in Yeager Stadium.  The Ichabods lost in the 96 minute 6 minutes in to overtime with a score of 0-1. With this loss the Ichabods are now at 5-3-0 for the season.

In the first half both teams where scoreless, in a defensive battle in between the two.   Freshman Goalkeeper Raegan Wells saved both shots that the Bearcat’s made.  And Sophomore Midfielder Mackenzie Menke recorded 2 shots on the Bearcat Goal both of them were blocked.

The Second half had the Ichabods and bearcats both fighting for the goal in a truly impressive stalemate for both sides.  Once aging Freshman Goalkeeper Raegan Wells rose to the occasion stopping all three shots towards the goal.  Junior Midfielder Tera Lynch and Senior Forward Olivia Garsso had three shots apiece on the Bearcat’s goal.  With one argued shot for Olivia Garsso on it being a goal or not.

In overtime the Ichabods struck first with a shot on the goal by Garsso, but it was stopped by the Bearcat’s goalkeeper.  The Bearcat’s finally managed to get a shot in at the 6-minute mark in overtime.  Thus, ending the game.